Borussia Dortmund received a setback after their new number nine, Sebastien Haller, was diagnosed with a testicular tumour. He will be out of action for a few months, leaving Dortmund short of attacking options. They were looking for his replacement and have finally found one. Anthony Modeste, a French striker, has been signed by Borussia Dortmund from Cologne. The 34-year-old has made his name in the Bundesliga, and 20 goals in the last season show that he can still chip in a few goals. He has played 190 Bundesliga games and could turn out to be a perfect back-up for Haller. At 34, he will finally get a chance to play in the UEFA Champions League.

Last season, the striker featured in 35 games in all competitions for Cologne. He started in 32 matches and scored 23 goals. 20 of his goals came in the Bundesliga, with an overall xG rate of 15.46. The striker even provided three assists in the last season. Modeste has a lot of presence inside the opposition’s penalty box and can play a similar role to what Haller does.

Modeste was ever-present inside the box for Cologne last season. The above viz shows the shot map of the player from the last season. The Frenchman made 96 attempts with a shot accuracy rate of 45.8%. He hit the target 44 times and converted 20 chances. The above viz shows that Modeste is a target man inside the opposition’s penalty box. He has also attempted a few shots from inside the opposition’s 6-yard box. Overall, we can observe that the striker can take positions inside the box and can score a few goals.

Modeste can also link up play with his other teammates. The Frenchman provided three assists last season and provided 12 assists in the Bundesliga. He attempted 371 passes with a 71.7% accuracy rate. These included 26 passes into the opposition’s penalty box with a 27% accuracy rate. The above viz shows his passing stats against Borussia Dortmund. He attempted 17 passes and provided an assist. The above viz shows that Modeste can provide key passes inside the box and create chances for his teammates. 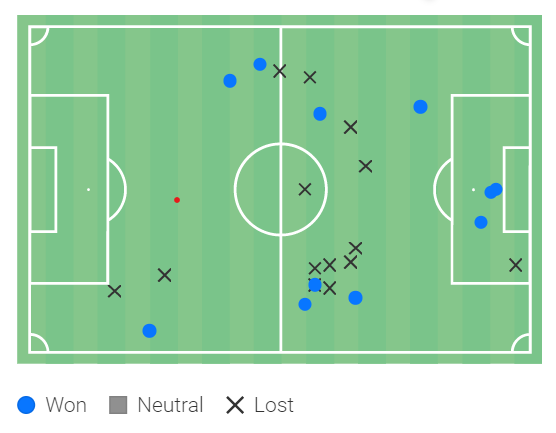 Contesting and winning duels is another quality that the striker possesses. Modeste was involved in 601 duels, and he won 38.1% of them. These included 213 aerial duels, and Modeste was able to win 50.7% of them. He can get behind crosses and attempt shots with his head. The above viz shows all the 25 duels contested by the forward. He won three duels inside the opposition’s penalty box and also scored a goal in that game. Borussia Dortmund will look to take advantage of his dominance inside the penalty box.

Anthony Modeste is guaranteed game-time at Borussia Dortmund. He could turn out to be a great signing for the German club, who are looking to beat Bayern Munich for the Bundesliga title. They had already signed a lot of players, and now, Modeste is yet another addition to the club. He will also look to make his mark and try to cement his place in the regular XI.