Borussia Dortmund are looking for strikers who could replace the departing Erling Haaland to lead their attack. They are scouting a lot of young and experienced strikers to become their new number nine. One of the latest targets that have emerged is RB Salzburg’s Slovenian international striker Benjamin Sesko. The 19-year-old has been a regular part of the Salzburg squad and has scored a few goals for them this season. He also featured in the UEFA Champions League and made some important contributions to his side’s run to the knockout stages. Here are some of the stats that will show why Dortmund is behind the striker.

Benjamin Sesko made eight appearances in the UEFA Champions League, two of which were in the qualifying stages of the competition. The player started in four matches and came off the bench in the other four. He managed to score one goal and even provided an assist. 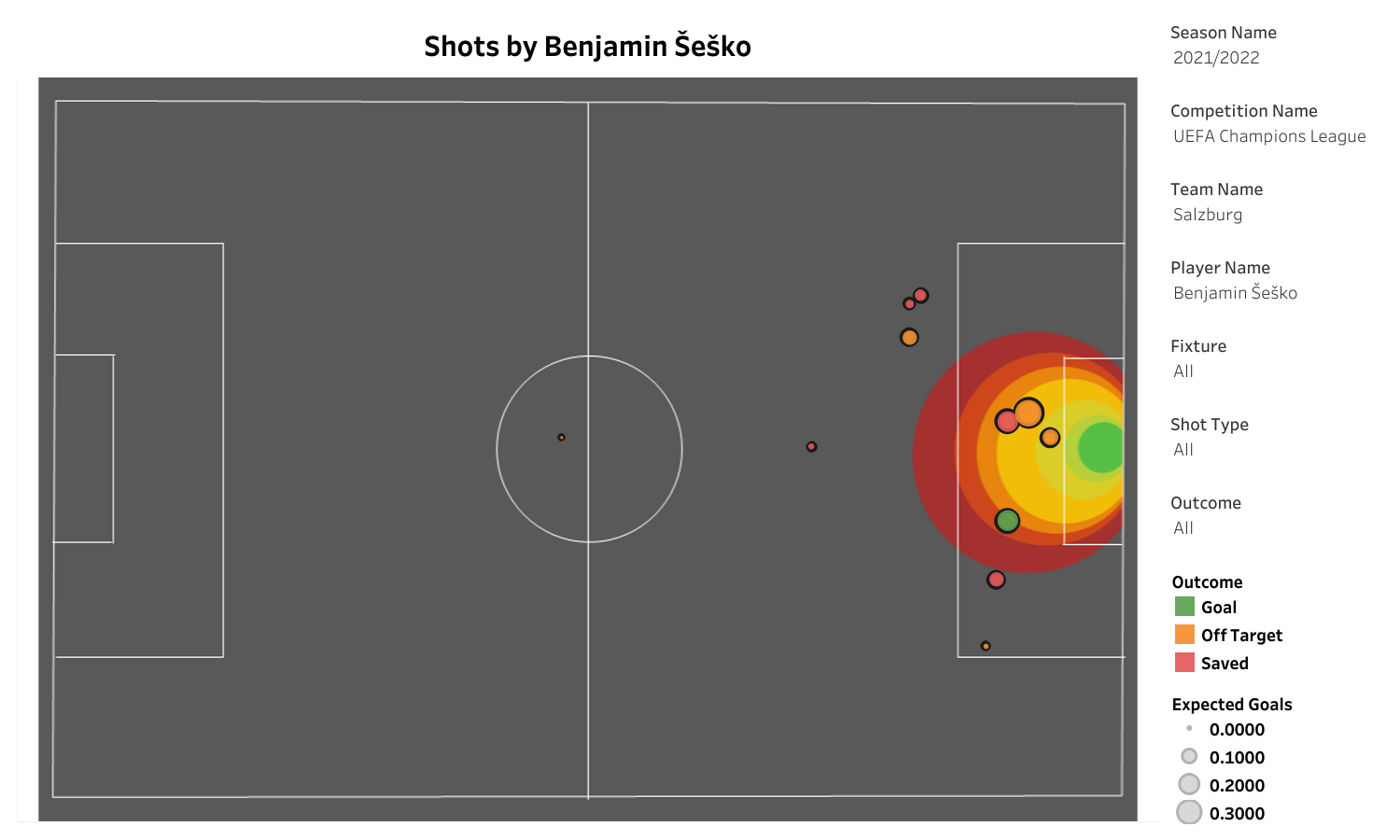 Salzburg usually play with two strikers, and both of them are very flexible with their positioning. The 19-year-old attempted 11 shots in eight matches and managed to hit the target four times with an xG rate of 1.45. A total of six shots were attempted from inside the opposition’s penalty box, and the goal was scored from the right side. He took 16 touches inside the opposition’s penalty box, and ten of them in the two qualifying matches played against Brondby. 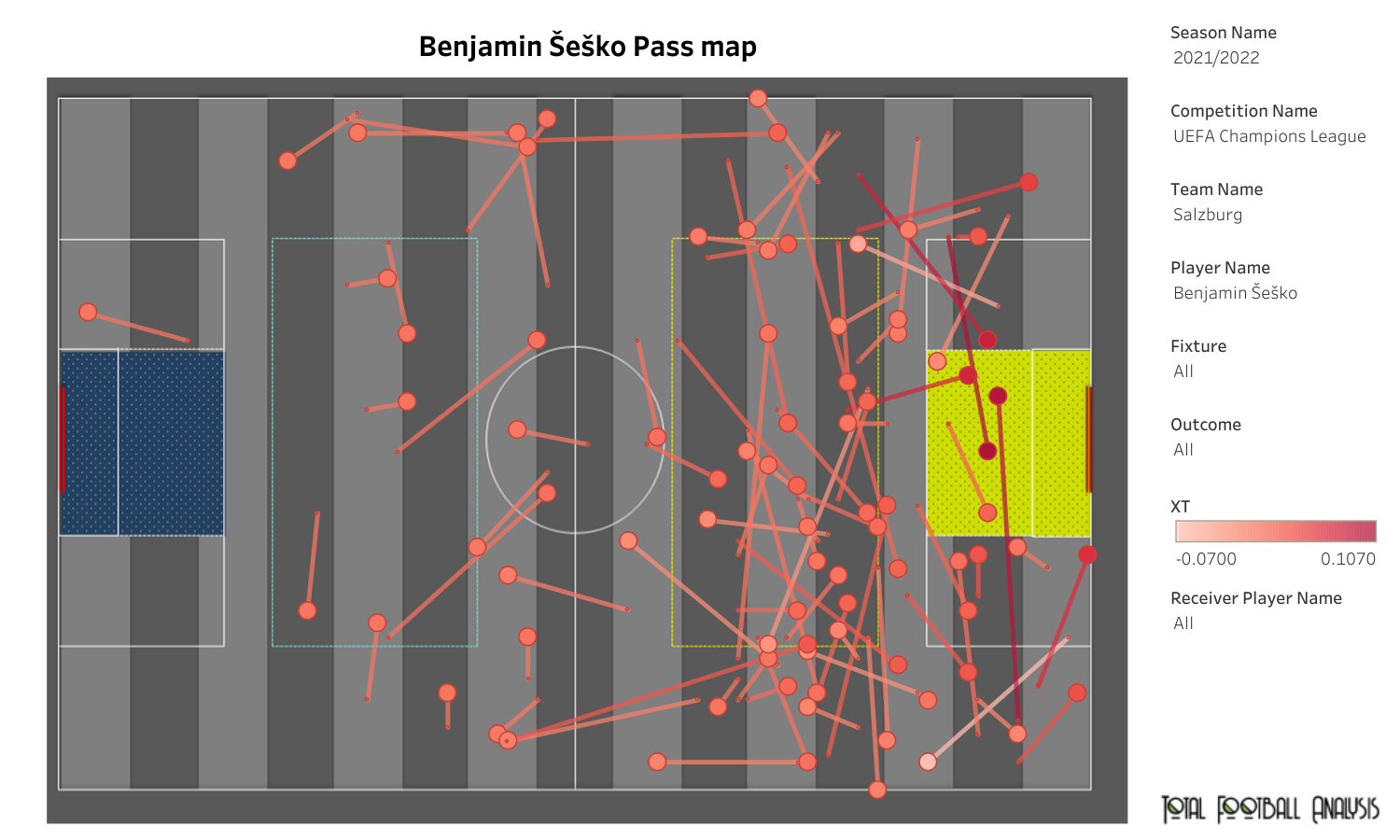 The striker was also effective with his passing and created a few threats. He attempted 74 passes with an accuracy rate of 83.78%. The above map shows that 12 passes attempted by him landed inside the opposition’s penalty box. These 74 passes included three crosses, two long passes, smart passes, and through passes each. Of these 74 passes, 16 were towards Brenden Aaronson. 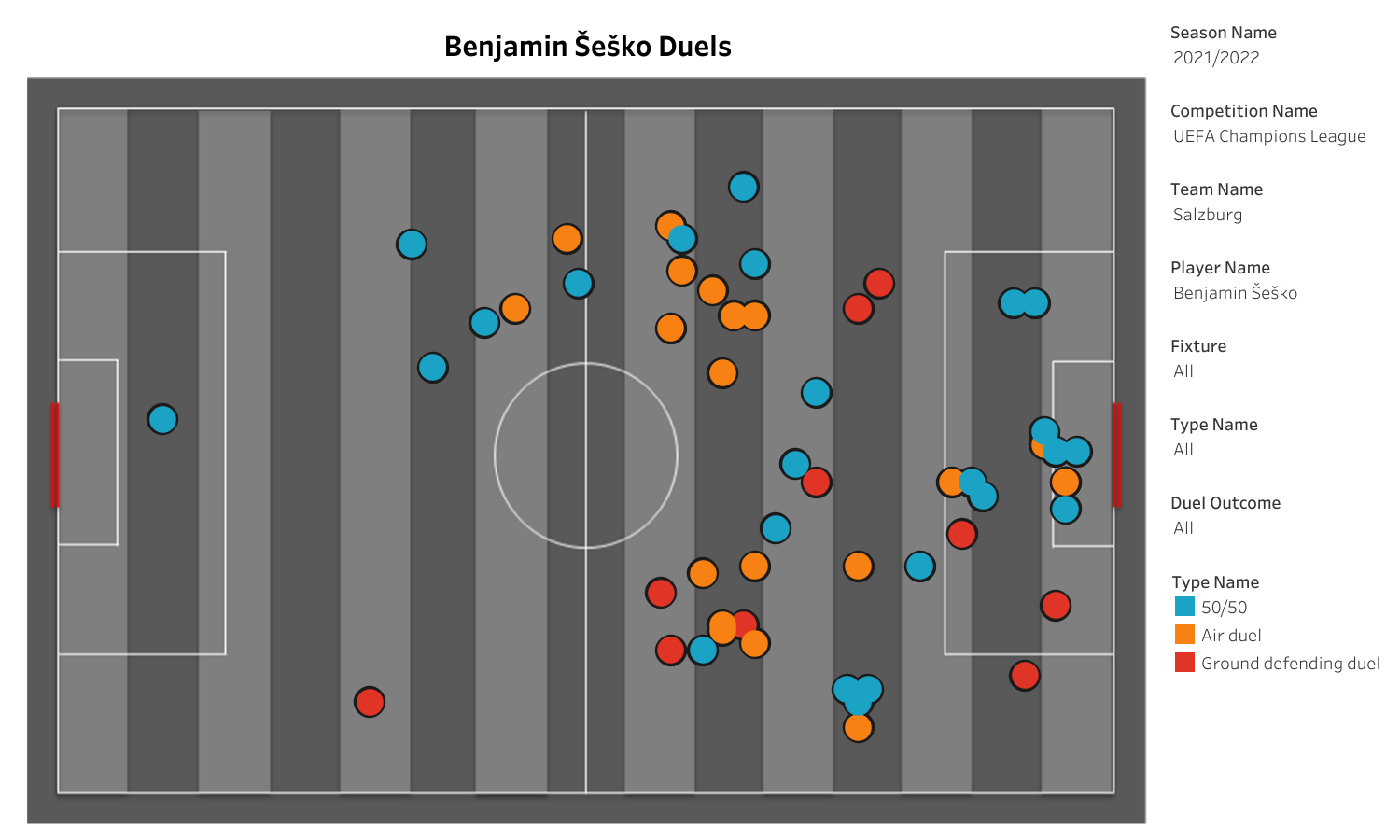 Benjamin Sesko has also contributed to the defensive side, and the above viz shows all the duels contested by him. He contested ten defensive duels, 24 loose ball or 50/50 duels, and 19 aerial duels. Most of the duels have been contested in the middle and final third. Other than this, he also made eight interceptions and nine recoveries for his side. He has shown that he can score goals and also help his side defensively.

Borussia Dortmund will look to acquire his services as soon as possible. He is also on the transfer list of other European clubs like Liverpool and Tottenham Hotspur. Over the years, Borussia Dortmund have nurtured young talent and helped the players in their growth. Sesko will also look to seal a move to a club where he gets more gametime and gets better over the years. The German club will face a lot of competition to sign the player.