Following their 3-1 defeat at the hands of Sporting on matchday five, Borussia Dortmund were eliminated from the Champions League. Manager Marco Reus stated after the loss that it was a “horrible defeat” for his side. Dortmund’s elimination from the group stage was disappointing for the fans as it was the first time in the previous three seasons that they had failed to qualify for the knockouts of the Champions League.

While the defeat against Sporting was disappointing, Dortmund were equally poor in their defeats against the Dutch giants, Ajax. In the away leg, they were humbled 0-4 on matchday three, as they had no answers to an exceptional Ajax side. The defeat was one of the few occasions in recent seasons where Dortmund’s charismatic striker failed to deliver. In the return leg at Signal Iduna Park, the German side struggled to perform yet again after taking the lead as Ajax produced a remarkable comeback and won 3-1. Although Dortmund were poor, they were hard done by a red card shown to defender Matts Hummels in the 29th minute of the match, as the replays displayed that Hummels’ sliding tackle on Antony did not make contact and that it was the Brazilian winger who fell on the German defender.

While they have had some bad luck, Dortmund have been inconsistent under Rose this season. They are currently nine points behind leaders Bayern Munich in the Bundesliga with 11 wins, one draw, and five losses in 17 games. As the season has progressed, it is looking highly unlikely that Dortmund will be able to challenge for the Bundesliga title as Bayern have been utterly dominant yet again.

Another reason behind Dortmund’s elimination in the Champions League has been injuries to their lead striker Erling Haaland. For the last two seasons, Dortmund have been overdependent on Haaland to produce the goods. Last season, the Norwegian striker scored a remarkable 10 goals in eight appearances in the Champions League. This season as well, he has scored three goals in three appearances. Haaland’s importance to Dortmund cannot be understated and it would be a difficult task for the Dortmund hierarchy to replace him when he eventually moves on.

Let’s take a look at some stats from Dortmund’s group stage matches and team benchmarking to understand what went wrong for the German side. 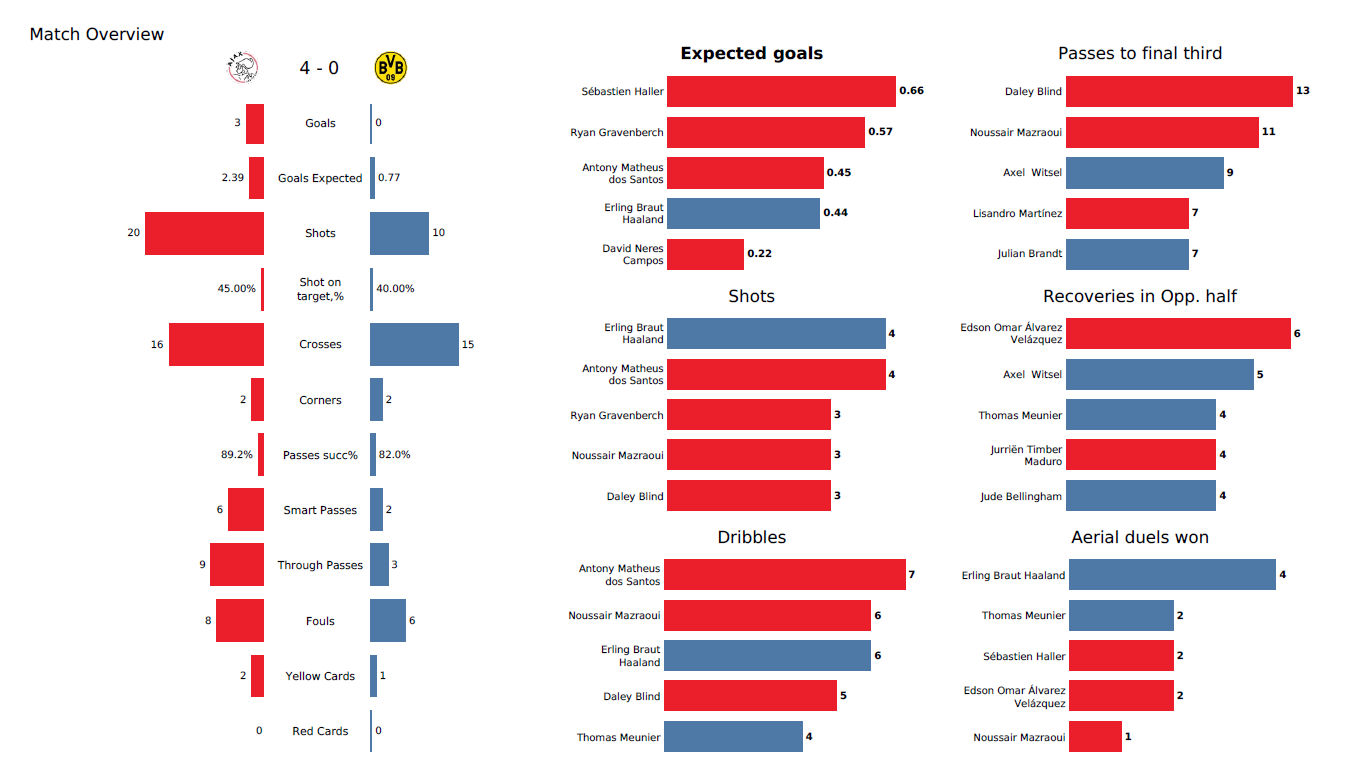 The above overview shows just how dominant Ajax were at home. The home side’s xG of 2.39 surpassed that of Dortmund’s 0.77. The majority of the attacking stats are also dominated by Ajax. Ajax took twice as many shots as their opponents. Marco Reus scored an own goal, which gave the Dutch side the lead. Daley Blind scored the second goal, while Antony curled an effort into the back of the net in the 56th minute. Sebastien Haller then scored the fourth goal for Dortmund, giving his side a 4-0 lead, which proved sufficient. Dortmund struggled to create enough chances against the impressive Ajax, which is evident from the above stats. 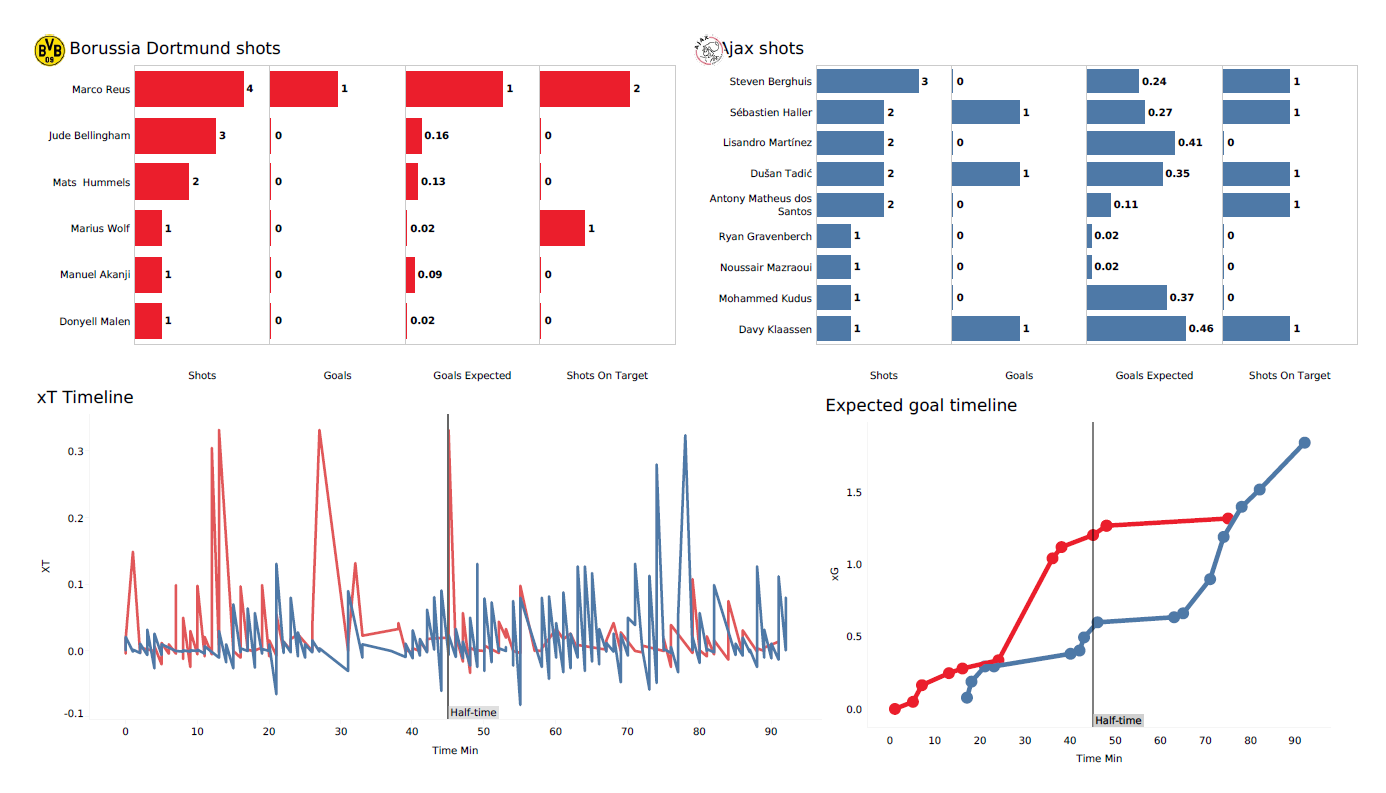 In the return leg against Ajax at home, Dortmund yet again failed to perform and lost the game 1-3 after taking the lead in the first half via a Marco Reus penalty. Goals from Tadic, Haller, and Klaasen inspired a remarkable comeback for Ajax in the second half as they took home the three points. In terms of the xT timeline, Dortmund were the more threatening side in the first half, however, they were dominated by Ajax in the second half. The xG timeline follows a similar suit. 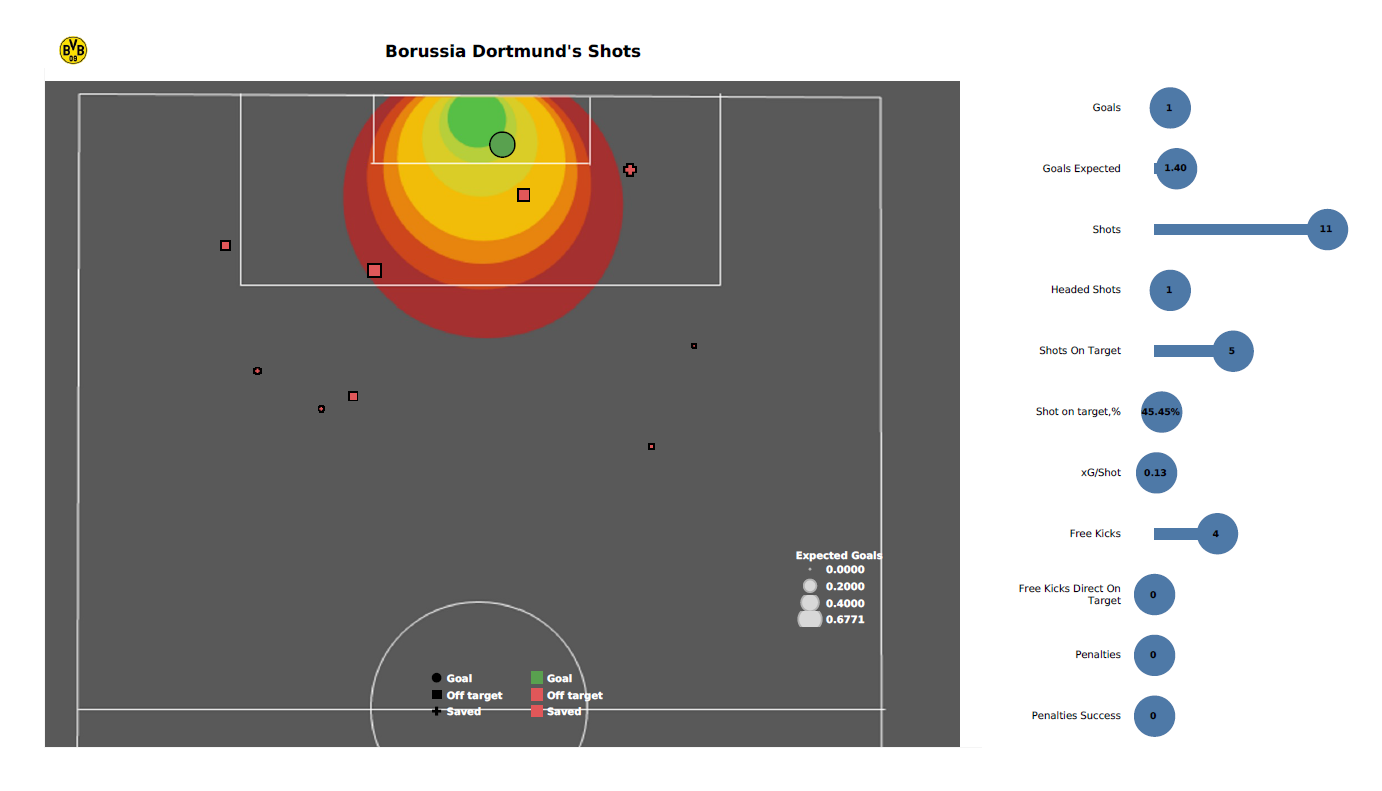 In the game against Sporting, after which they were eliminated, Dortmund displayed their inconsistency and failed to deliver as they were humbled 1-3. Goals from Goncalves and Porro ensured that Sporting were victorious at home. Dortmund’s shot map above displays that they had problems in penetrating the opposition box, as the German side took most of their shots from outside the box. 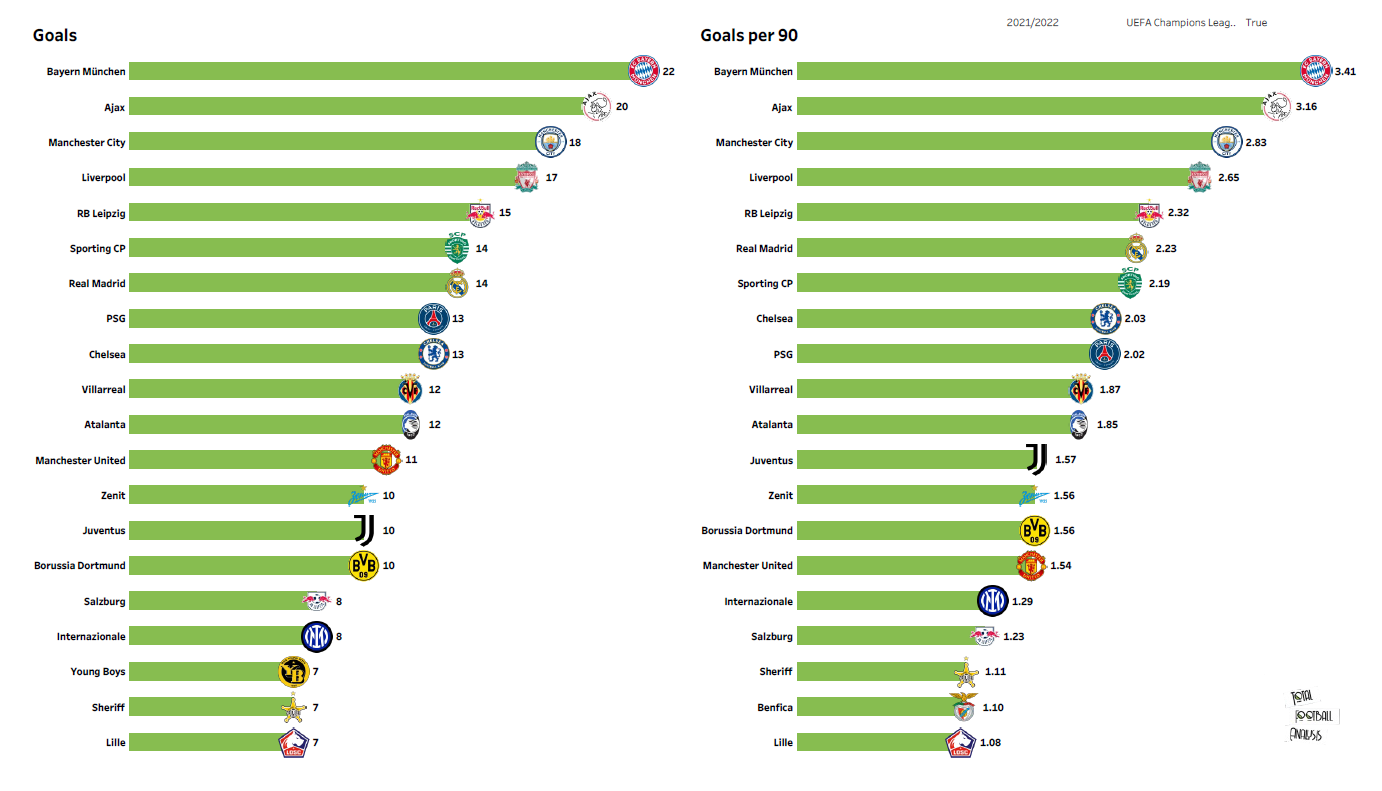 The above benchmarking stat further indicates that Dortmund failed to measure up to the other top European teams. They are placed at joint 10th spot in terms of goals, while their average goals per match puts them in the joint 13th spot. Dortmund have been overdependent on Haaland and suffered immensely when their striker was absent due to injury.

Dortmund will now be looking to get their season back on track after the winter break. While bad luck and injury did play a part in their underwhelming performances in the group stages of the Champions League, their inconsistency and poor defensive form are the main reason that Dortmund failed to qualify for the knockouts.