Borussia Dortmund were one of the busiest teams in the summer transfer window. They signed eight first-team players to strengthen the side and compete against Bayern Munich to end their dominance in the league. So far, their business of rebuilding the team has paid off, and the German side won their opening two league fixtures. They remain one of the two sides in the German Bundesliga with a 100% record. Edin Terzić also has had a positive impact on the team. His change in tactics and formation has allowed Dortmund to show dominance over their opponents in the last two matches. He has enough squad depth to compete in the league as well as in the UEFA Champions League. Dortmund are aiming for some silverware this season.

Borussia Dortmund started the season with a 1-0 win over a strong Bayern Leverkusen side. The Black and Yellows had 45.7% ball possession and were the more creative side. In the second match, they made a comeback in the second half to complete a 3-1 victory over Freiburg. The players have shown their character in these two matches and have made a big statement to their rivals.

Now, let us look at the three key takeaways from the opening fixtures of Borussia Dortmund.

A change in formation

Borussia Dortmund played in a 4-2-3-1 formation last year. Erling Haaland played as a lone striker at the top. This season, they signed Sebastien Haller, but the player is on the treatment table. Anthony Modeste was signed as his backup a few days ago. This forced the manager to make some changes in the formation.

Dortmund played the first match in a 4-4-2 formation. Youngster Youssoufa Moukoko led the line alongside club captain Marco Reus. Reus played as a secondary striker in the team. They only made one change to the formation by shifting to a back five for the last ten minutes of the match. This formation allows Dortmund to play with an extra attacker, and that puts a lot of pressure on the opposition.

Modeste was signed 2-3 days before the second league game. He immediately got a start and the team shifted to a 4-2-3-1 formation. Dortmund were unable to score a goal with this formation. The manager changed the formation to 4-4-2 in the 70th minute and introduced Moukoko to the starting XI. They opened their account in the 77th minute and scored three goals by the 88th minute. This shows that the change in formation has worked well for the Black and Yellows in the last two matches.

Creativity from the centre 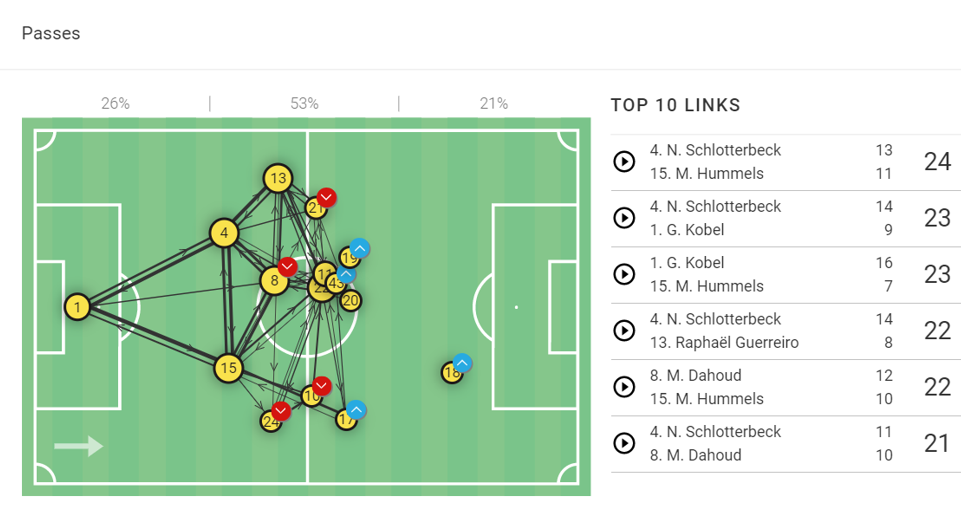 Borussia Dortmund’s creativity has come from the centre this season. They have created attacks from the flanks but have been more effective from the back. The above viz shows the passing links and the average position of the players in their previous match. It can be observed that the striker and the attacking midfield drop to the centre, and these players play a lot closer to each other. They generate plays from the centre to put the opposition on the defensive. 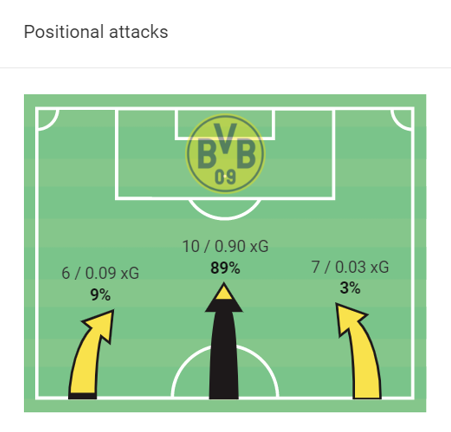 The positive impact of new signings

Nico Schlotterbeck has cemented his place in the side as the left centre-back. Modeste also earned his first start for Borussia Dortmund in the last match. Karim Adeyemi started in the first match, but an injury forced him out just 22 minutes into the match. These are the three signings that have started a match for their new club.

Schlotterbeck has helped his side to keep a clean sheet and has contested a few defensive actions to help his team win the ball. He has made 31 recoveries in two matches and contested 45 duels with a 64.44% win rate. The 22-year-old has made a partnership with the experienced Mats Hummels, and they will look to concede as few goals as possible.

Modeste was also active in his first match for Dortmund. He played the full 90-minutes and attempted two shots with a 50% accuracy rate. He will play as the number nine in the absence of Haller.

Borrusia Dortmund fans will be happy with these performances. The team has shown some improvement and has enough bench strength to compete for a title this season. Edin Terzić’s tactics have paid off so far, and he will aim to collect maximum points from every game.

Under the microscope: Nico Schlotterbeck – The new defensive enforcer at Dortmund

BVB beaten for the first time

Under the microscope: Nico Schlotterbeck – The new defensive enforcer at...