Dortmund are reportedly in the running for Aston Villa youngster Carney Chukwuemeka. The 18-year-old has been touted as one of the most exciting prospects in the Premier League, and the Dortmund hierarchy believes that he can replicate the success of Jadon Sancho and Jude Bellingham at Signal Iduna Park. Chukwuemeka, whose deal runs till the end of the next season, has not agreed to a new contract with Aston Villa so far.

Manchester United, Liverpool, and Manchester City are reportedly among the clubs to have shown interest in signing the young midfielder. Chukwuemeka joined Aston Villa’s youth setup in 2016 and made his debut towards the end of last season. Since then, he has featured in nine games in the Premier League. The 18-year-old is considered a top talent and has all the attributes to develop into an impressive midfielder.

Dortmund are reportedly planning an overhaul in the summer and could see some of the big names depart the club. Among those names are Julian Brandt, Thorgan Hazard, Manuel Akanji, Emre Can, and Erling Haaland. The Black & Yellow’s current campaign has seen them struggle with consistency, and they would be looking to bounce back next season. With many scouts praising Chukwuemeka’s all-round ability in the midfield and claiming that the 18-year-old is one of the best players that Aston Villa have come through, Dortmund could take the opportunity to sign the midfielder. Their track record of developing up-and-coming English players has been impressive and could aid them in their pursuit of the midfielder.

Let’s take a look at some stats to gauge Chukwuemeka’s performances and strengths. 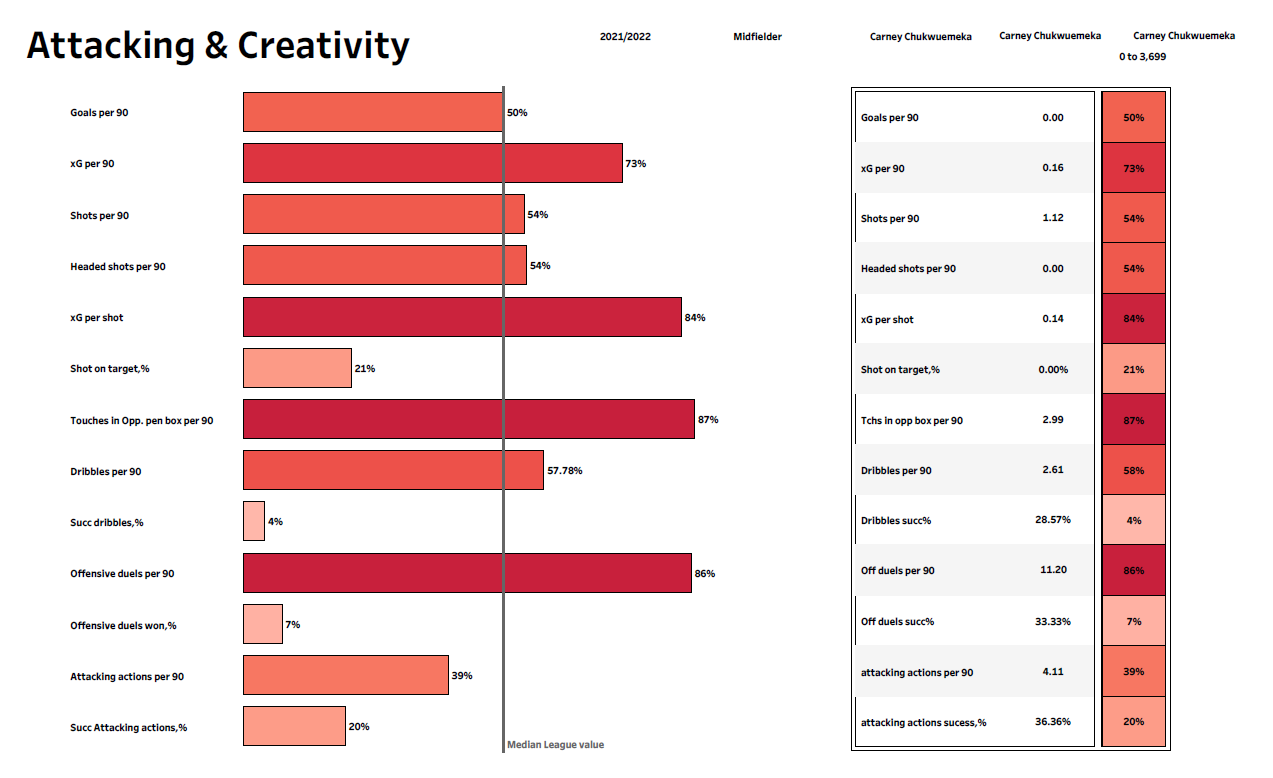 In the above viz, we can see Chukwuemeka’s attacking & creativity stats. Considering that most of his appearances this season have come as a substitute, the 18-year-old’s stats are decent. Most of his attacking & creativity stats are above the league median, with the most notable stats being xG per shot, touches in the opponent’s penalty box per 90, and offensive duels per 90. Chukwuemeka is a tall attacking midfielder, who is capable of slotting in at multiple positions. He displays impressive balance and composure with the ball, utilizing his quick change of feet to bypass opponents in the midfield third. 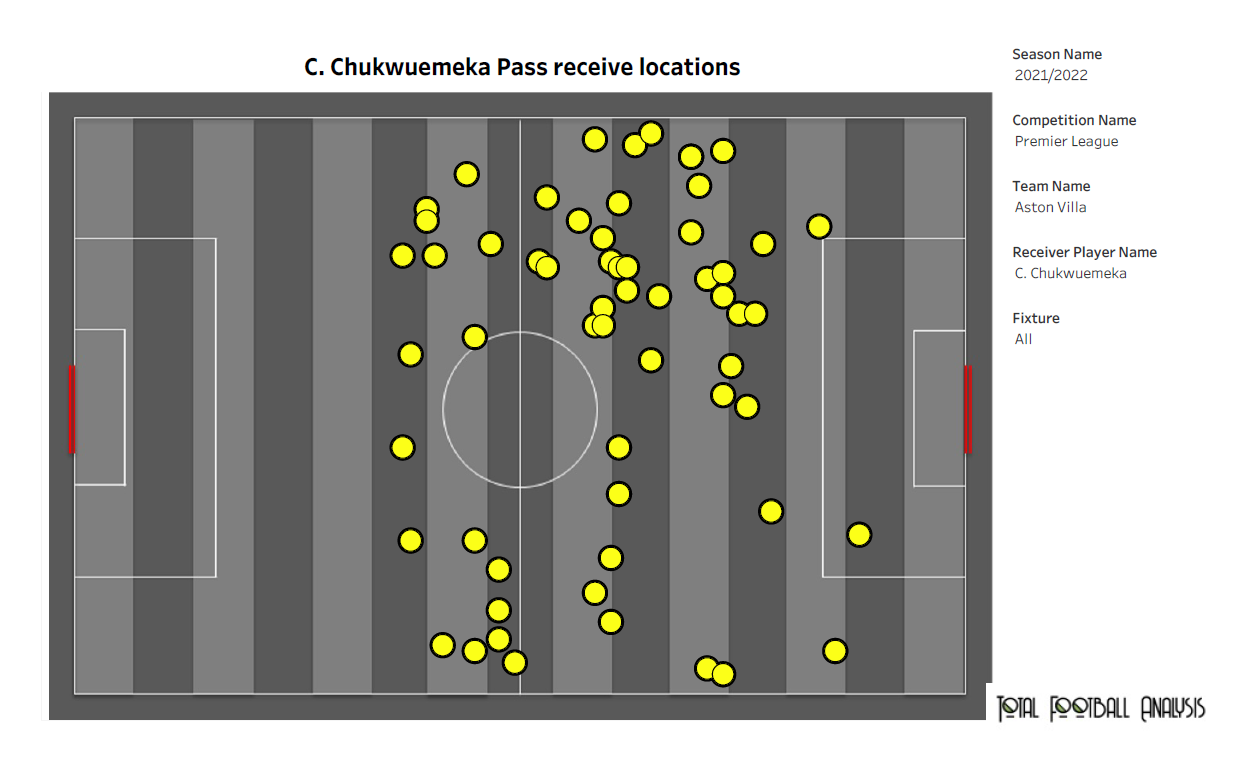 The above viz indicates the locations on the pitch where the young midfielder has dropped to receive his passes. We can see that he has been mobile enough to move in the opponent’s half as well as his half. Chukwuemeka’s strong build allows him to cope with stronger and more physical players than him. He possesses impressive pace and athleticism while also displaying excellent vision and ball control. When making a run with the ball at his feet, the 18-year-old is difficult to contain, indicating his effective use of pace. 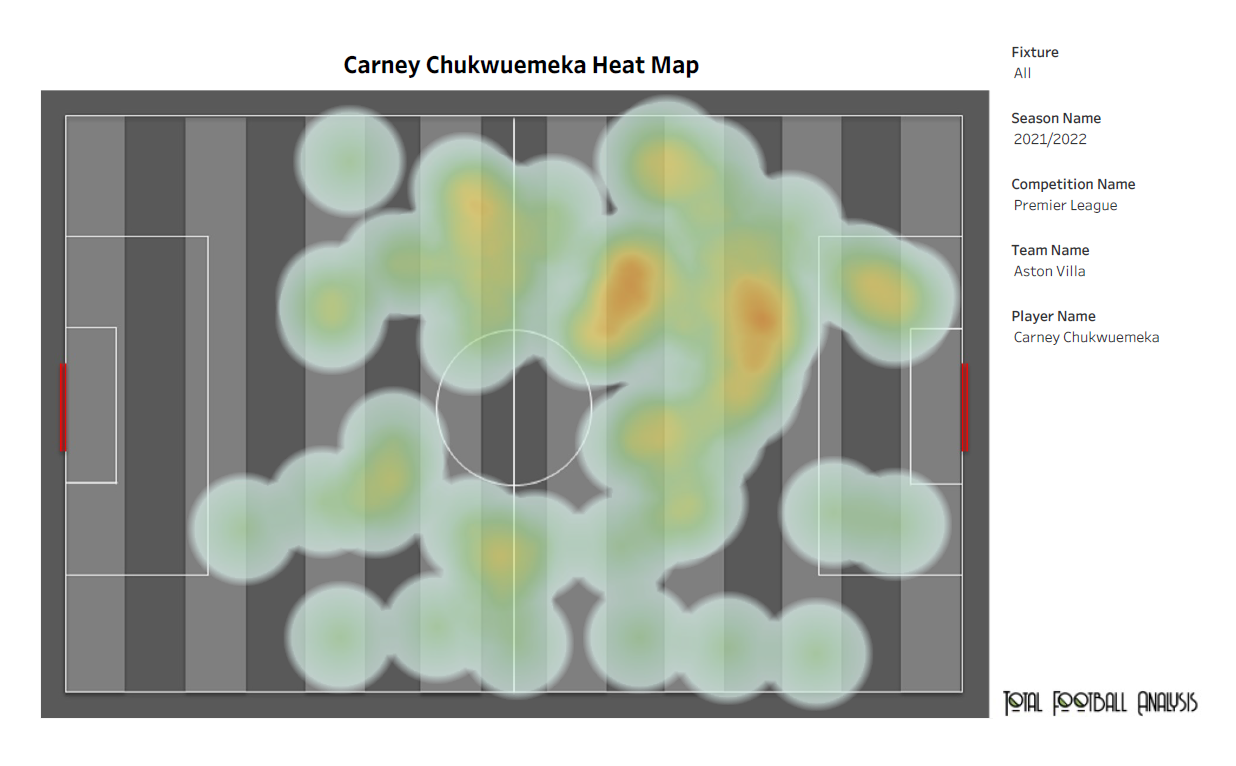 We can see Chukwuemeka’s areas of activity on the pitch in the above viz. Chukwuemeka has been mostly active in the opponent’s half near the half-spaces on the left wing. The 18-year-old is versatile enough to be deployed as a central midfielder, attacking midfielder, and even as a centre-forward. However, this season he has mostly been deployed as a central midfielder or as an attacking midfielder. Chukwuemeka has an impressive work rate, and he links up well with his teammates, often bringing them into play with quick one-two passes.

Chukwuemeka is an exciting young prospect. Although he is still young, the 18-year-old displays impressive ball control, strength, and vision. With the recent success of English youngsters in the Bundesliga, Chukwuemeka could take the next step in his career at Dortmund.