It was reported at the end of last year that Borussia Dortmund are in the race to sign Benfica forward Darwin Nunez. The 22-year-old has been attracting interest from a host of European clubs, including Barcelona, Manchester City, Atletico Madrid, and AC Milan. Multiple outlets have claimed that Dortmund see Nunez as a suitable replacement for their star striker Erling Haaland. The in-demand Norwegian striker is reportedly on his way out with many top clubs in line. Considering that Haaland does leave this summer, Dortmund would need a striker capable of leading the line.

Nunez is currently having an impressive season with Benfica, scoring 26 goals and adding a further two assists in 33 appearances. Although they are placed at the third spot in the Primeira Liga, Benfica have progressed to the quarter-finals of the Champions League, snatching the title of ‘tournament’s biggest dark horse’ from Ajax. Nunez has been influential in his side booking a place in the next round as he scored the deciding goal against the Dutch giants in the return leg of the Round-of-16.

Although he still has three years left in his current deal with Benfica, Dortmund would be confident of matching Benfica’s demands as they would themselves command a sizable fee from the sale of Haaland. While it is a daunting task to replace a striker of Norwegian’s ability, Nunez has the capability and talent to make an impact in the Bundesliga.

Let’s take a look at some stats from the Champions League to gauge if Nunez is a suitable replacement for Haaland. 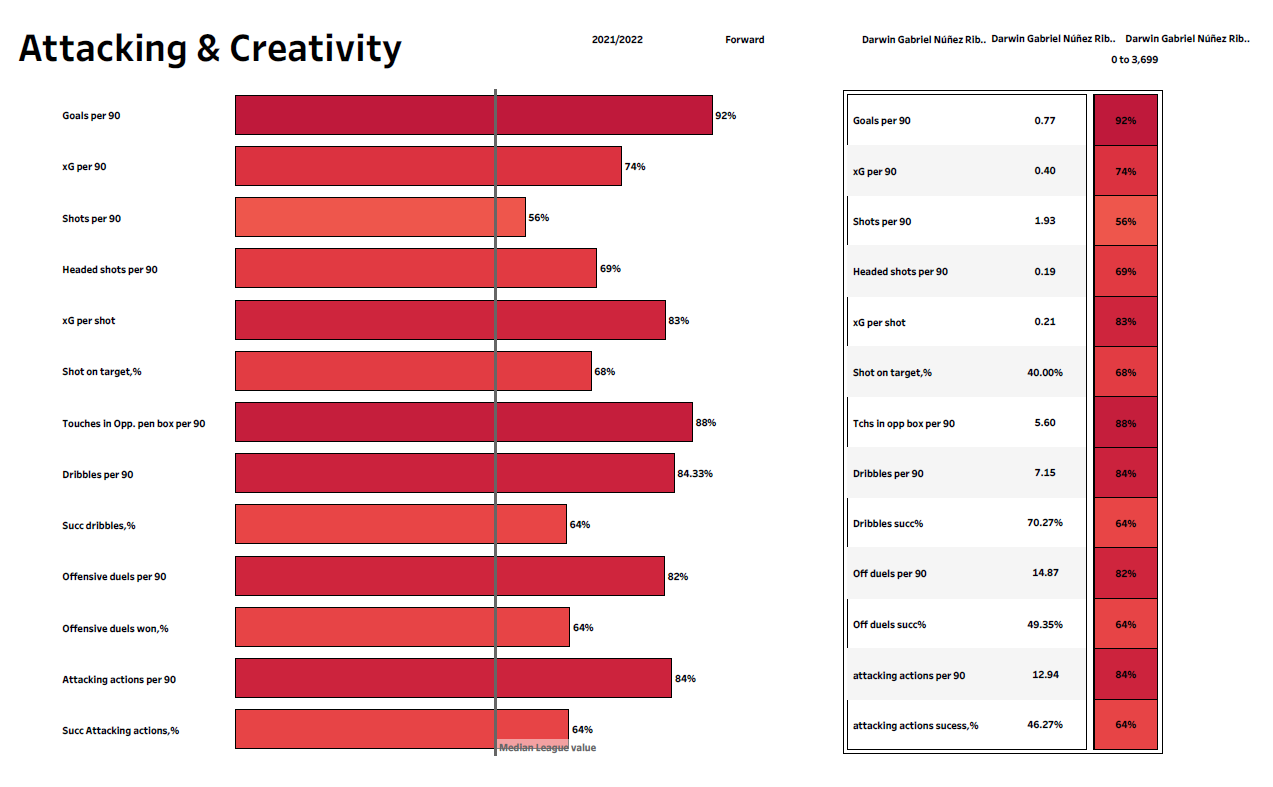 Nunez boasts some impressive attacking & creativity stats, with his most notable stats being goals per 90, xG per shot, touches in the opponent penalty box per 90, offensive duels per 90, and attacking actions per 90. His success rate in his offensive duels and attacking action is also impressive. The 21-year-old possesses an athletic build and has demonstrated explosive pace and acceleration. His movement is slightly similar to that of Haaland. He is strong on his feet and is capable of withstanding challenges. Darwin displays decent awareness; he usually scans space and makes excellent decisions when moving relative to the ball, space, teammates, and opponents. 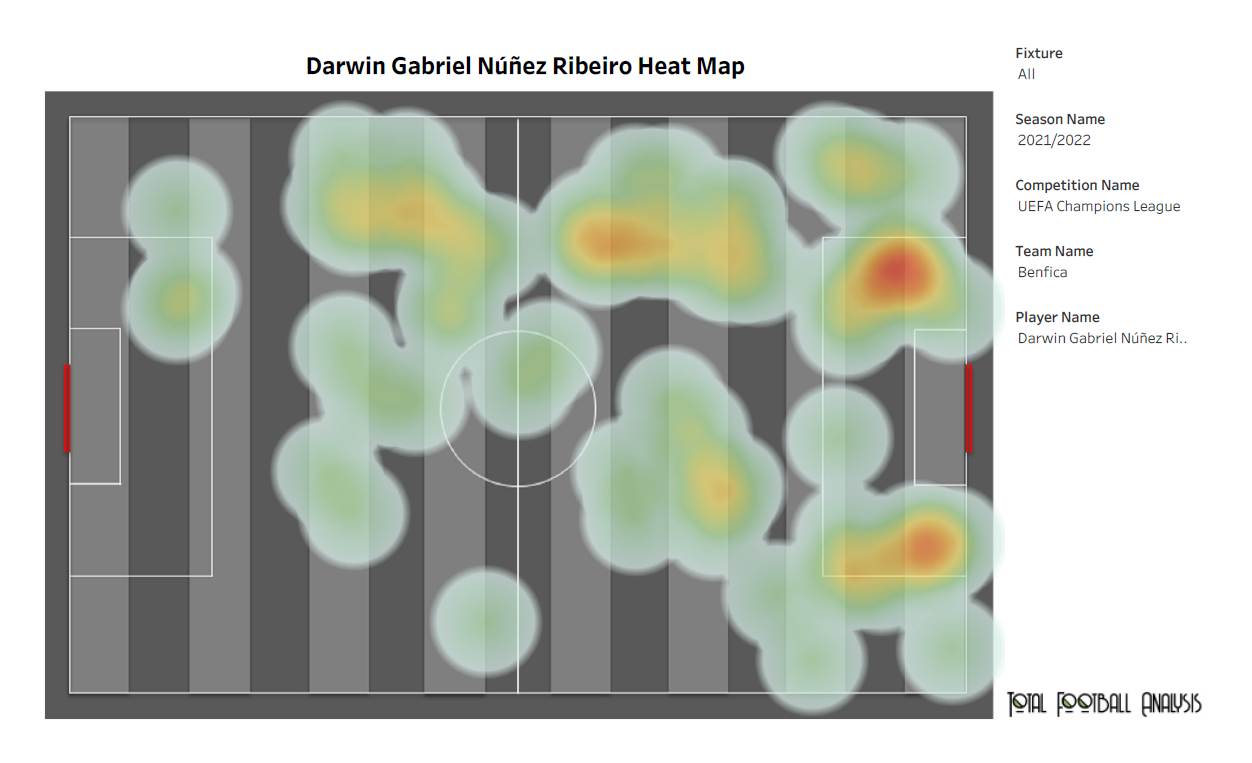 In the above viz, we can see the areas of the pitch where Nunez is most active. Darwin demonstrates a dual-threat near the opposition box; his direct runs into the space are often threatening, while his nimble movements around the opposition box are difficult for the opposition defender to gauge. The 21-year-old occupies spaces between the defenders, often looking to make sharp runs behind the defensive lines, dragging the defenders with him in the process. He is relentless in his pressing and displays an impressive work rate. We can see that he has occupied multiple spaces all over the pitch. 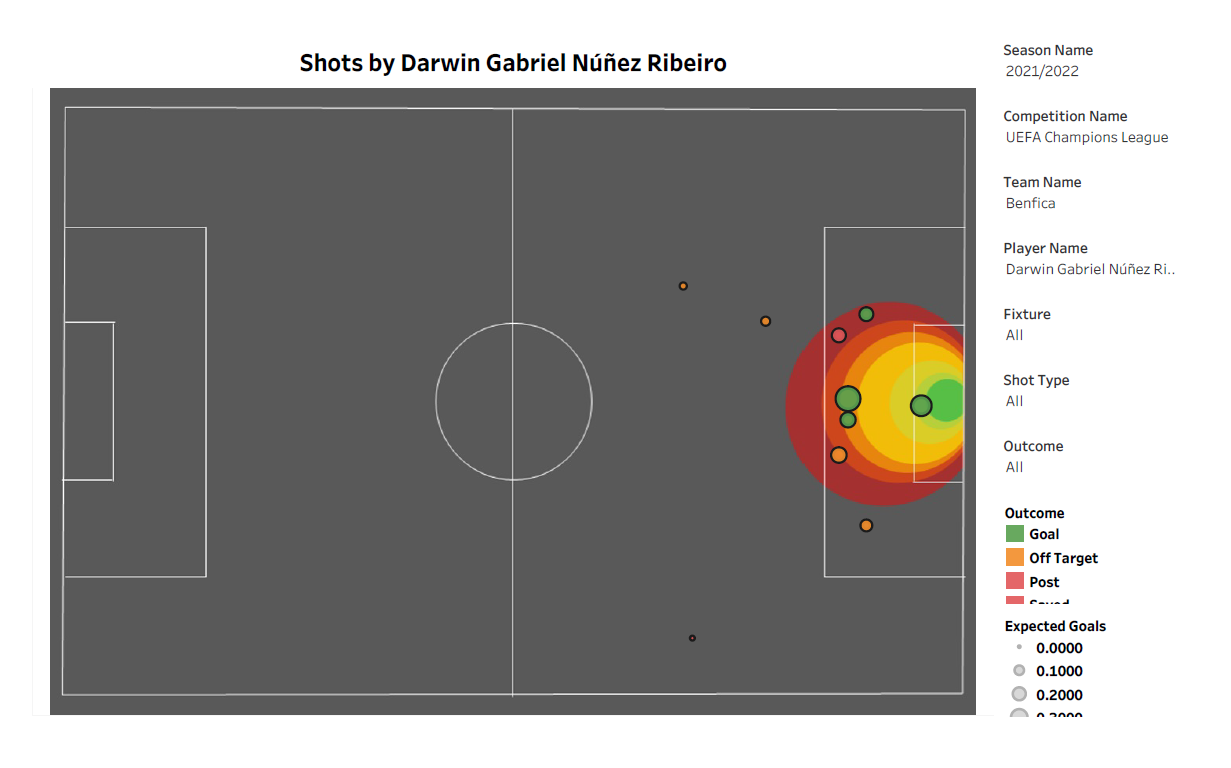 The above shot map highlights the locations from where Nunez has taken his shots. So far, he has scored four goals in the Champions League, all from inside the opposition box. Darwin demonstrates his presence, instinct, and guile to create various shooting angles for himself. He is not afraid to take a shot and does so regularly.

Nunez is an ideal candidate to replace Erling Haaland at Signal Iduna Park. While it would be a difficult feat to match Haaland’s goal-scoring record, nevertheless, Nunez could be a capable replacement for leading the line for Dortmund.