It was reported at the start of the January transfer window that Borussia Dortmund have lined up German wonderkid Karim Adeyemi as a likely replacement for Erling Haaland. Mirroring the Norwegian striker, who also had his breakout season at RB Salzburg, Adeyemi has been in sensational form in the Austrian Bundesliga. He has already recorded 14 goals and two assists in 17 league appearances. In addition, the German striker has scored three goals in six appearances in the Champions League group stages and one in the qualifying round as well.

Liverpool, Bayern Munich, Barcelona, and Atletico Madrid were among the top clubs to have shown interest in Adeyemi, however, reports from the past few days have claimed that the 20-year-old striker has decided on a move from Dortmund. Although Haaland remains at Signal Iduna Park, reports of his eventual move have been surfacing regularly since last season. The Norwegian striker is one of the most sought-after strikers in Europe currently, and with his release clause now activated, it has reportedly been accepted by the Dortmund hierarchy that Haaland will move this summer.

Adeyemi has been one of the standout performers for RB Salzburg this season and has been instrumental in his side’s charge through the Champions League group stages. Salzburg have qualified for the Round of 16 and will be taking on the German giants Bayern Munich.

Let’s take a look at some stats from the Champions League to gauge whether the 20-year-old striker has what it takes to become the successor to Erling Haaland at Dortmund. 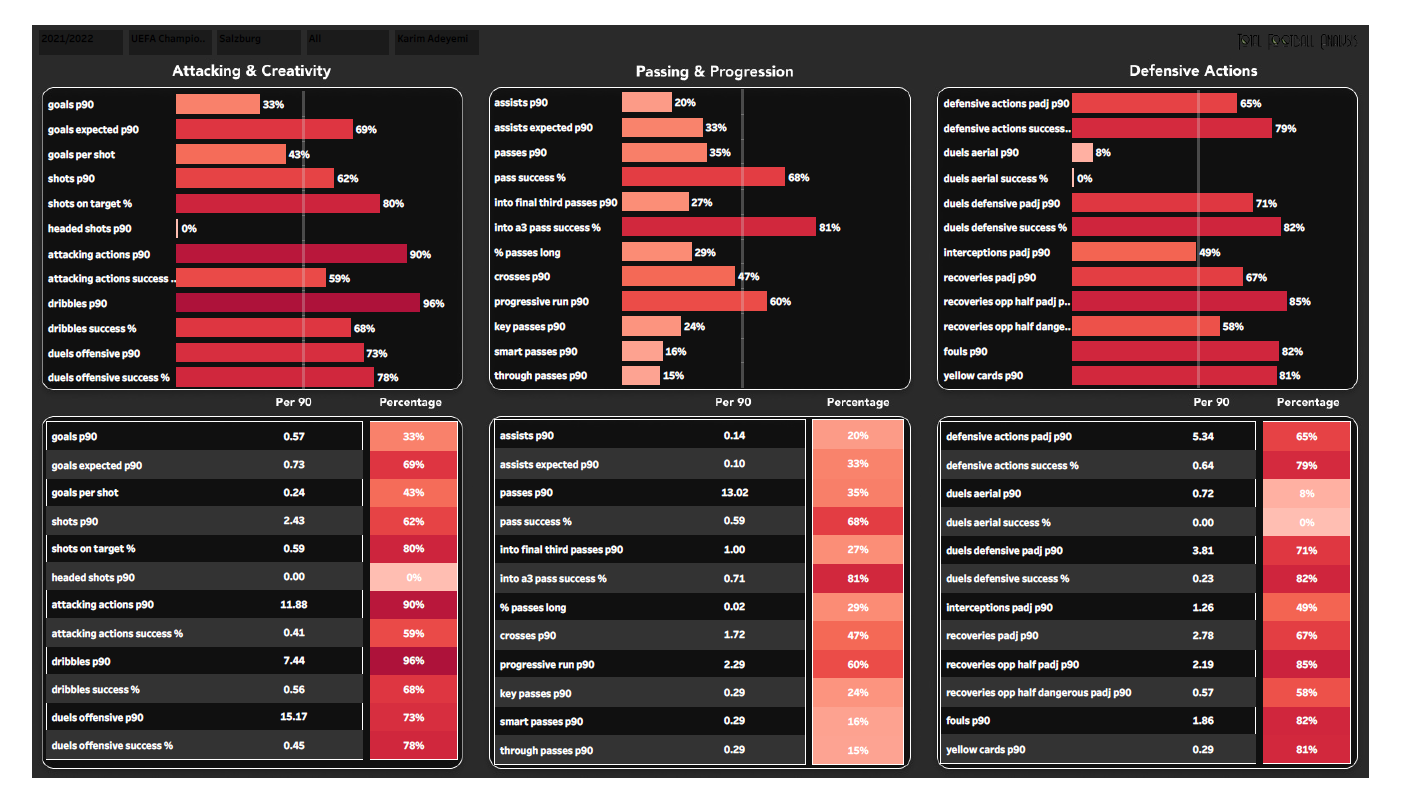 In the above viz., we can see Adeyemi’s overall attacking & creativity, passing & progression, and defensive stats. The majority of his stats surpass the league median value, with the German striker ranking highly in terms of attacking actions per 90 and dribbles per 90. Adeyemi has managed a dribble success rate of 68%, while his shot accuracy is 80%. His passing & progression stats are an area where the 20-year-old striker can improve, however, his defensive stats are impressive for a forward player. The quick and versatile striker is known for his explosive and direct style of play. He is adept at finding spaces behind the defenders and possesses the pace that allows his side to counter quickly. 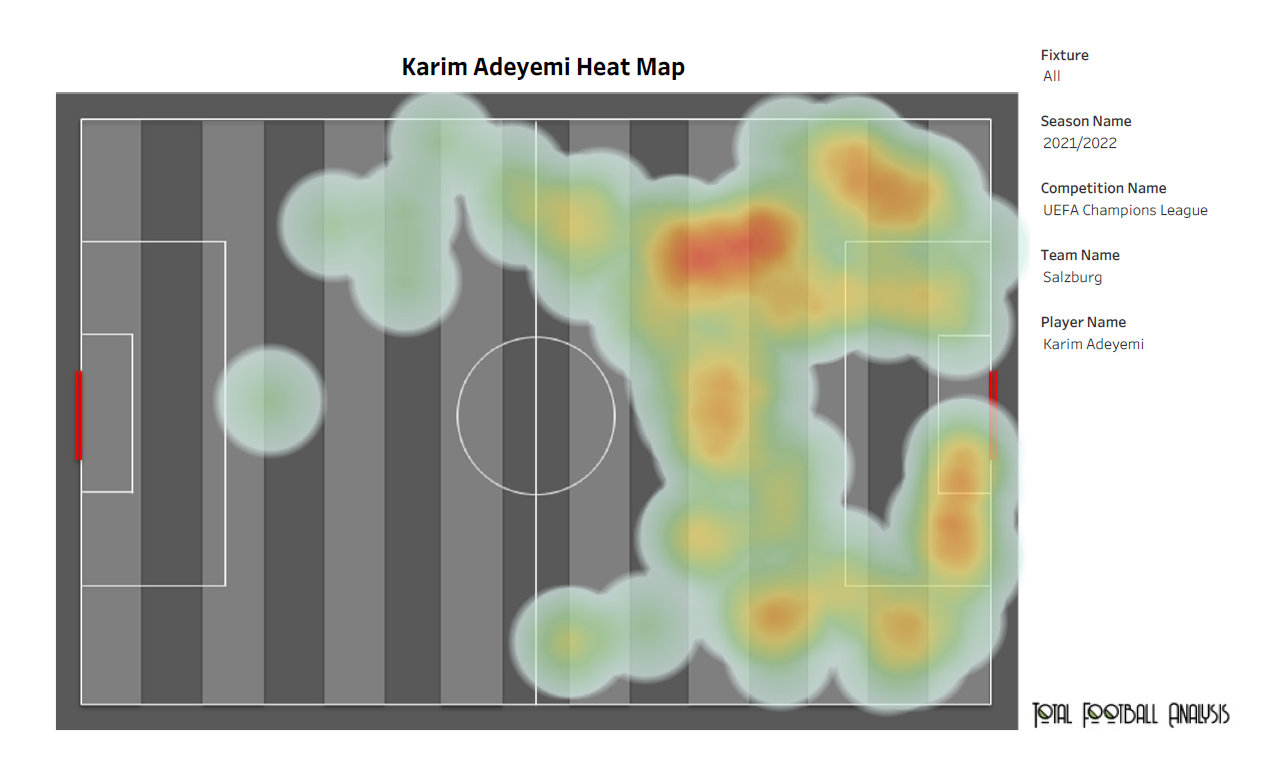 The above heat map highlights the areas of the pitch where Adeyemi is most active. The versatile youngster has been mostly deployed as a striker; however, he is capable of playing on either wing. We can see the German striker’s movement in multiple areas near the opposition box, which further indicates his versatility and flexibility. Adeyemi, when deployed along with a strike partner, occupies the space on the left-hand side where he can stretch the opposition defense, allowing the other forward players to exploit the spaces. 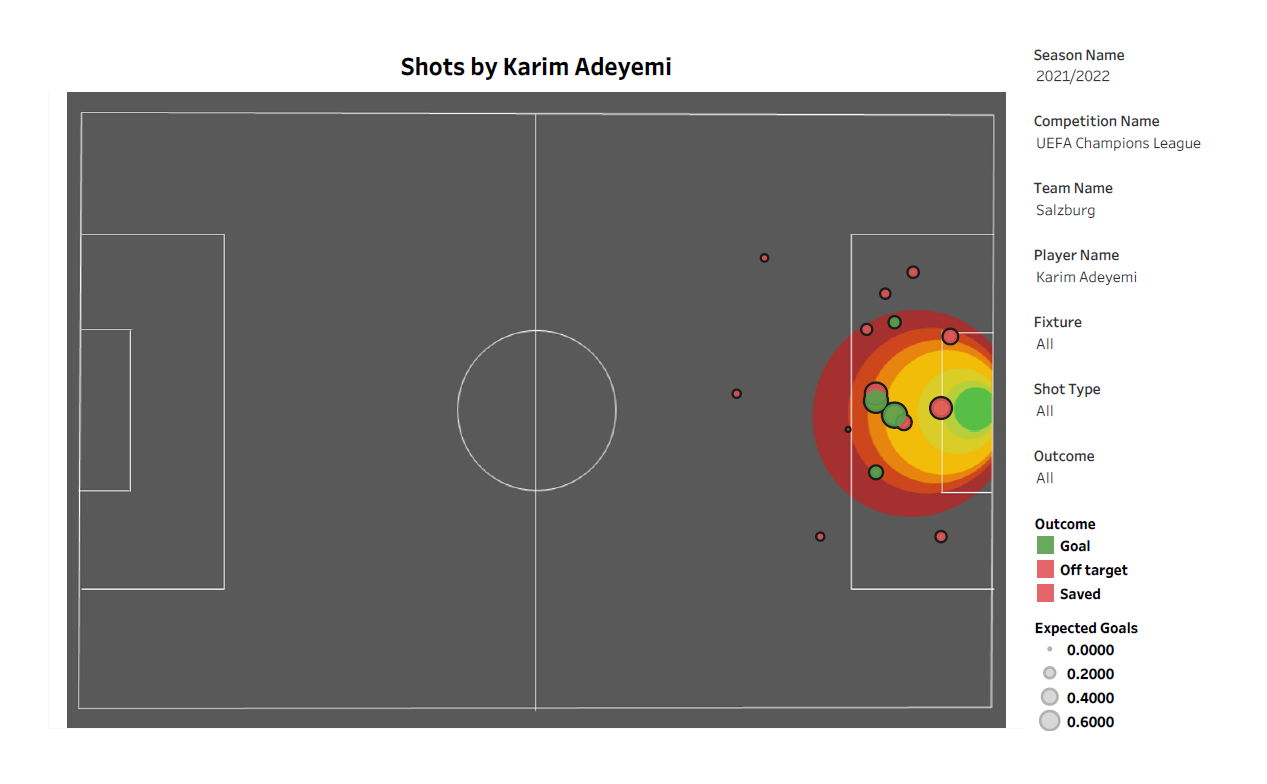 Adeyemi’s shot map highlights the location of his various shots and goals in the Champions League this season. We can see that he has taken the majority of his shots from inside the opposition box, indicating that the German forward is capable of penetrating the box frequently. All of his goals in the group stages have been scored from inside the opposition box as well. Despite his relative lack of physicality, Adeyemi displays impressive balance and strength on the ball, attributes that make him difficult to mark. 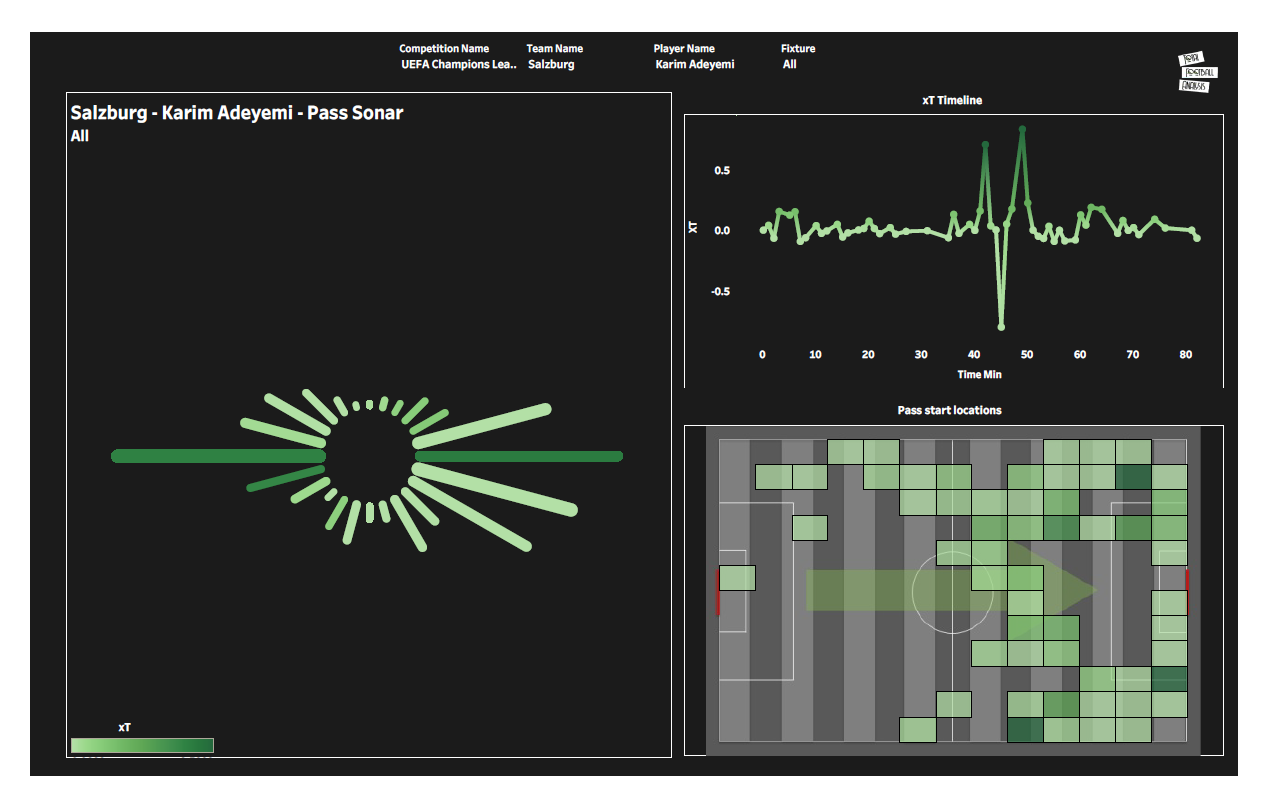 The above viz. highlights the directionality of Adeyemi’s passes. The 20-year-old forward is adept at passing, but he can improve upon his link-up play. In the above visual, we can see the pass start location areas of the pitch where Adeyemi has been threatening from his passes.

From his stats, we can see the reason why Dortmund have lined-up Adeyemi as a replacement for Haaland. Although his style of play is very different than Haaland’s, the 20-year-old has displayed his deadly accuracy in front of the goal. The youngster is a brilliant prospect and has the potential to become one of the top strikers in Europe.