It has been reported that Borussia Dortmund are interested in a move for Real Madrid striker Luka Jovic. The 24-year-old, who has been on the fringes of the Los Merengues’ squad since his move to Santiago Bernabeu, has recently emerged as a subject of interest for Dortmund. With Erling Haaland’s departure looking likely in the summer, Dortmund would need a replacement for the Norwegian striker. The 21-year-old’s departure will leave Borussia Dortmund with a vacancy up front, and they have reportedly lined up replacements, including Karim Adeyemi and Timo Werner.

Jovic had an impressive spell with Eintracht Frankfurt, and he was one of Bundesliga’s top strikers in the 2018-19 season. His time at Real Madrid has been the one to forget, as the 24-year-old has not been able to break into the first-team squad under Zidane or currently under Ancelotti. So far, he has made just 49 appearances for Los Merengues, scoring thrice. With Real Madrid heavily interested in securing the services of Erling Haaland, a possible cash plus player deal could be on the cards.

While it will be a massively difficult feat to fill in the goal-scoring shoes of Erling Haaland, Jovic has already shown that he is capable of being the leading man upfront. During the 2018-19 season, the striker scored 19 goals in the Bundesliga. His experience in the Bundesliga could provide him with the edge to succeed at the Signal Iduna Park.

Let’s take a look at some stats to gauge if Jovic would be a suitable replacement. 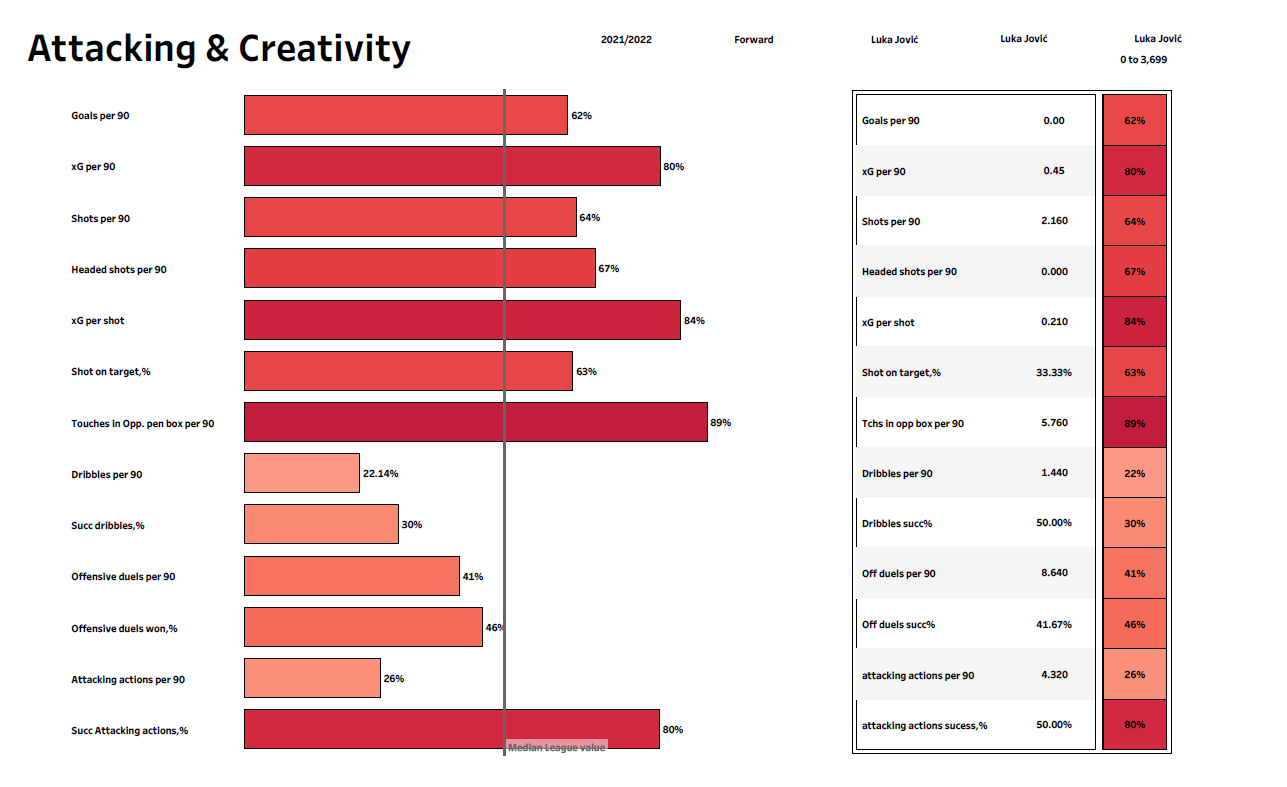 In the above viz, we can see Jovic’s attacking & creativity stats. Most of the stats are above the league median, with the most notable stats being xG per 90, xG per shot, and touches in the opposition’s penalty box per 90. However, it should be noted that some of his stats might be inflated due to his relatively fewer appearances. Nonetheless, Jovic offers a versatile attacking threat – he can be deployed as the main striker or as part of the two-striker setup. The Serbian international displays strong finishing, and he can create chances as well. Jovic is adept with both feet and is aerially strong. Jovic’s pacy and direct runs behind are threatening. 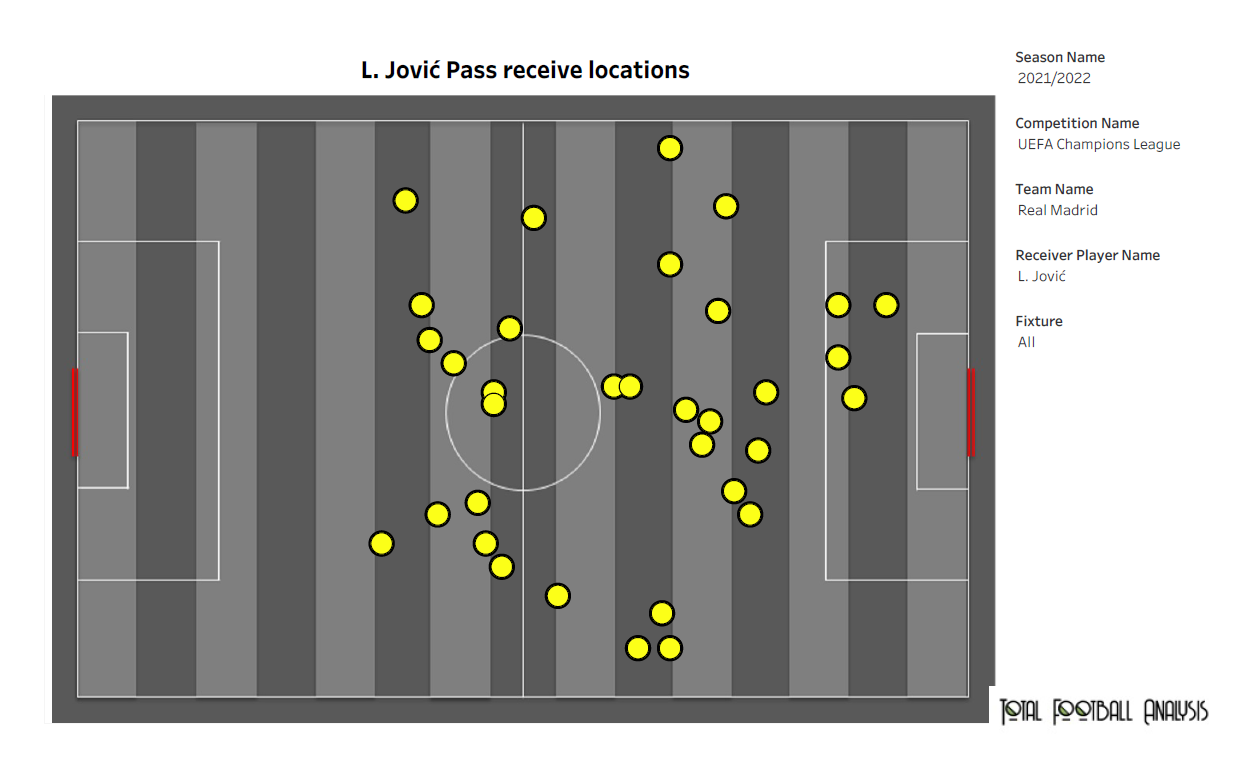 The above viz displays the locations of the pitch where Jovic drops to receive his passes. Jovic displays positional awareness and knows where to place himself to take advantage of the positioning of the central defenders or full-backs. His positioning allows him to make threatening runs which are often missed by the defenders, giving him the edge on the defensive line and allowing him to maintain the spatial advantage. We can see in the above viz that Jovic can drop deep to receive passes and aid his team in the build-up. 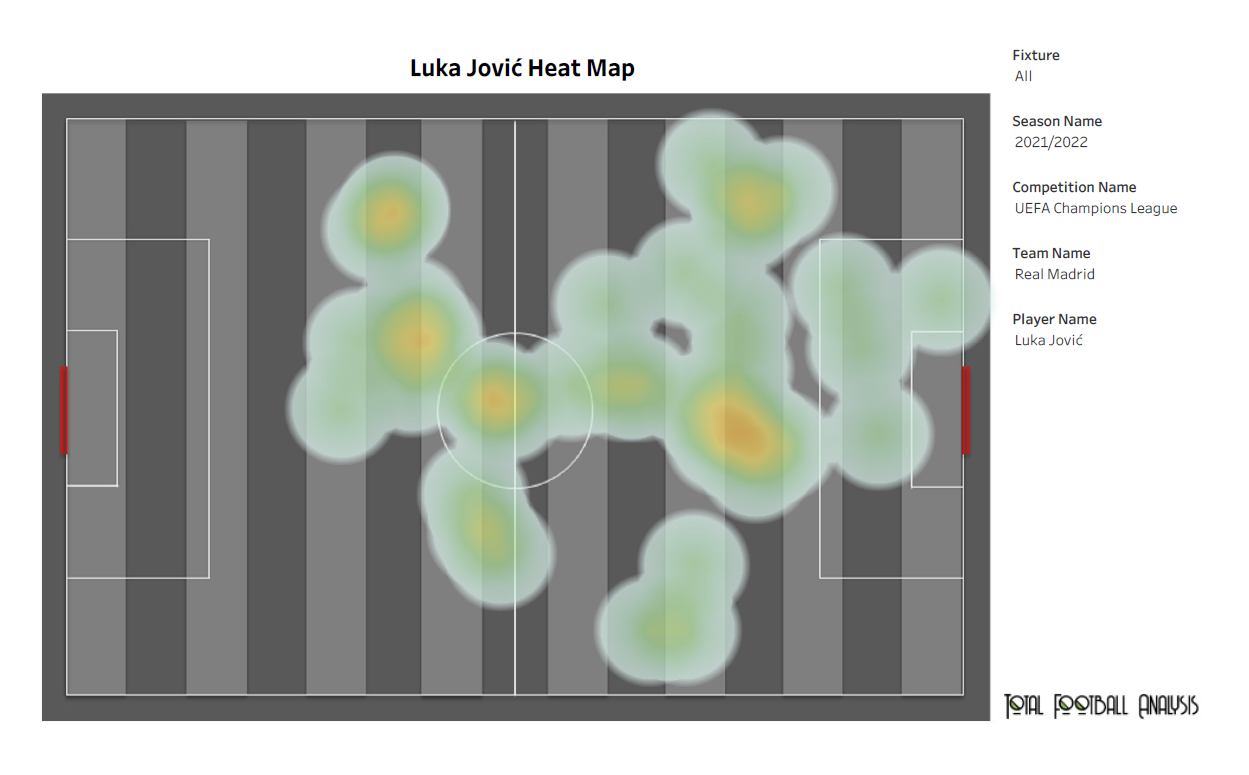 Despite his smaller frame, Jovic can outmuscle defenders bigger than him. Although he is not the tallest, he often comes out on top in aerial duels and outpaces the defenders, displaying his spatial awareness and how to exploit the space effectively. The 24-year-old has a knack for being at the right place at the right time, and he often finds himself at the end of a goal-scoring chance. His ability to occupy threatening spaces and find effective shooting locations is impressive.

Despite not getting opportunities for Real Madrid, Jovic can rediscover the form that he displayed in the 2018-19 season. A move to Dortmund could work out for all the parties involved.