Borussia Dortmund landed Nico Schlotterbeck as one of the major signings of the summer. The 22-year-old was signed from their German Bundesliga rivals, SC Freiburg. He was signed to improve the defence of the Black and Yellows, who aim to end Bayern Munich’s decade-long dominance in the league. Schlotterbeck is a German international defender who has cemented his place in Dortmund’s starting XI. He is the first choice centre-back in the team and plays on the left side because of his favoured left foot.

Schlotterbeck has represented Freiburg, Union Berlin, and Borussia Dortmund in the German Bundesliga. He has played 70 games in Germany’s top division and has already made a name for himself. This season, he is getting the nod ahead of another new signing, Niklas Süle. Sule has more experience than Schlotterbeck and has won five Bundesliga titles and a UEFA Champions League crown. The manager still preferred Schlotterbeck, and here are some of the stats that show why the 22-year-old is the new defensive enforcer at Dortmund. 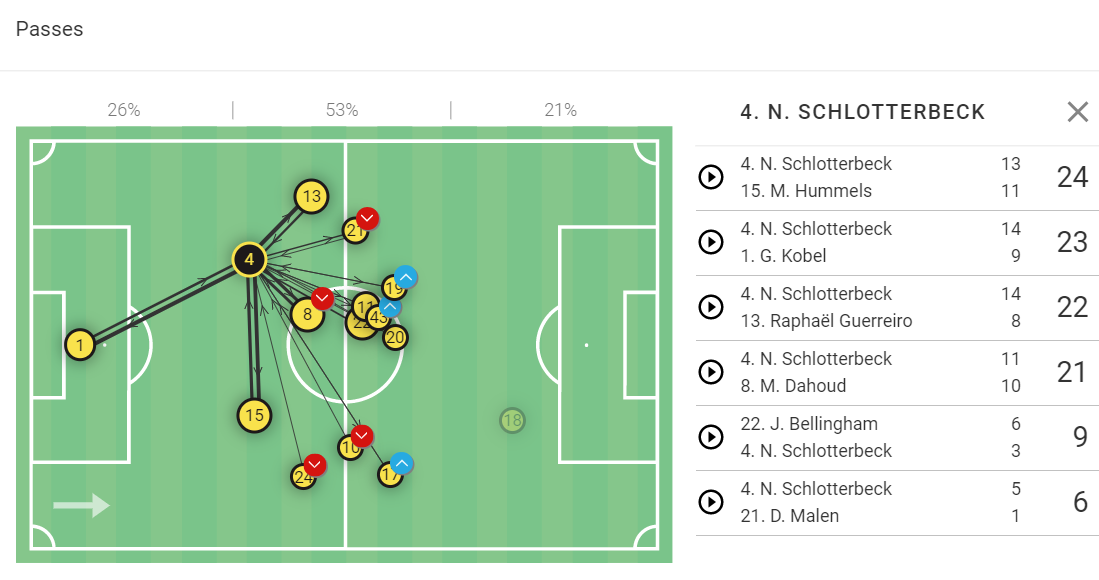 Schlotterbeck plays as a left centre-back and has started in the first three games of the season. The centre-back helped his side keep a clean sheet in the first match. Schlotterbeck’s ability to play from the back and his confidence with the ball were one of the reasons he attracted the attention of many clubs. This season, he has once again shown his skills. The defender averaged 46 passes per 90 minutes with a 92% passing accuracy rate. The above viz shows the passing links that the defender created against his former club on Matchday 2. Schlotterbeck attempted 72 passes with an accuracy rate of 92%. It can be observed that the centre-back distributed the ball to different areas on the pitch. Overall, the centre-back has attempted nine passes to the final third and has found his teammates seven times. 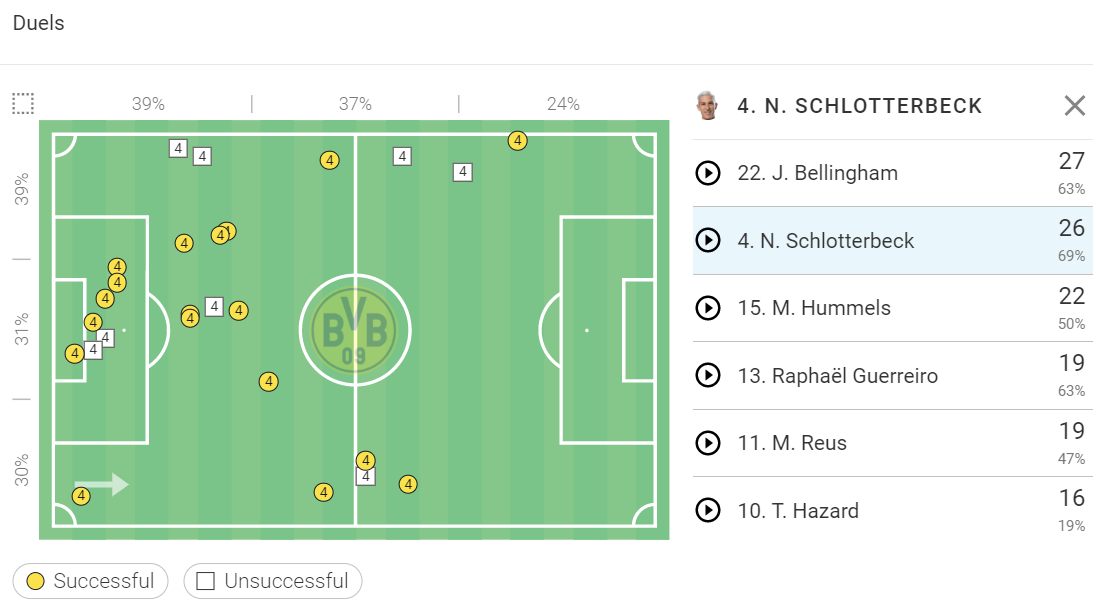 The 22-year-old has been on top when it comes to defensive duties. Schlotterbeck has contested 63 duels and won 22. The above viz shows his duels’ location against his former club. Schlotterbeck contested 26 duels and won 18. He won most of the duels in the defensive third and cleared the danger successfully. The defender has also recovered the ball 47 times, with three recoveries coming in the opposition’s half. This shows that he can read the opposition’s play and break their attacks easily. 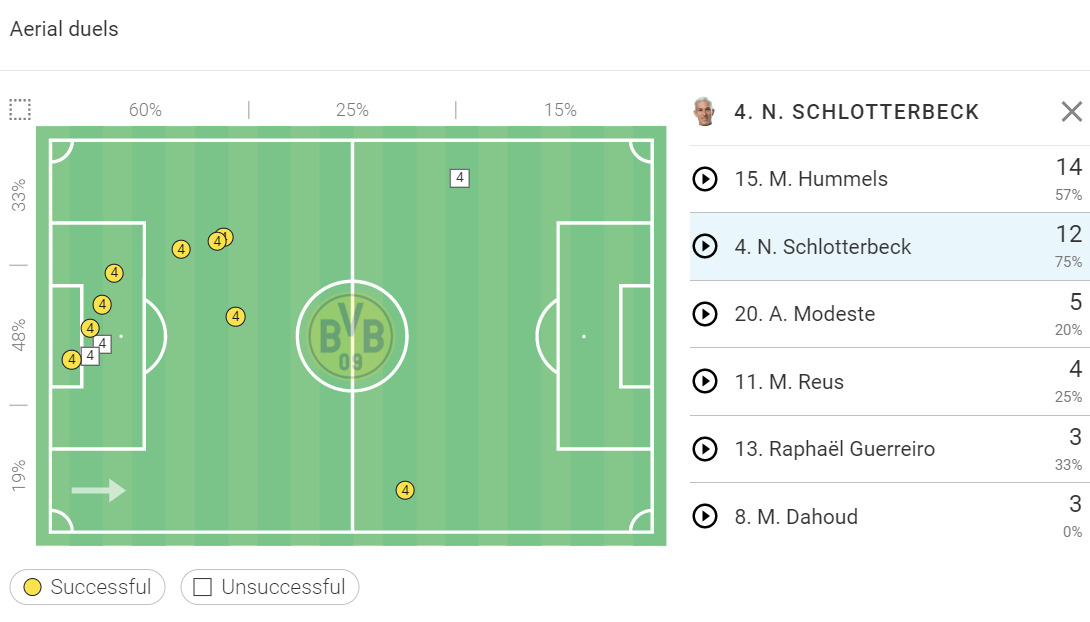 Nico Schlotterbeck has been an asset in the air. He has contested 27 aerial duels with a 70.4% success rate. These duels were mostly contested to clear the lofted ball attempted into dangerous areas by the opposition. He reads the play well and gets into early defensive positions. 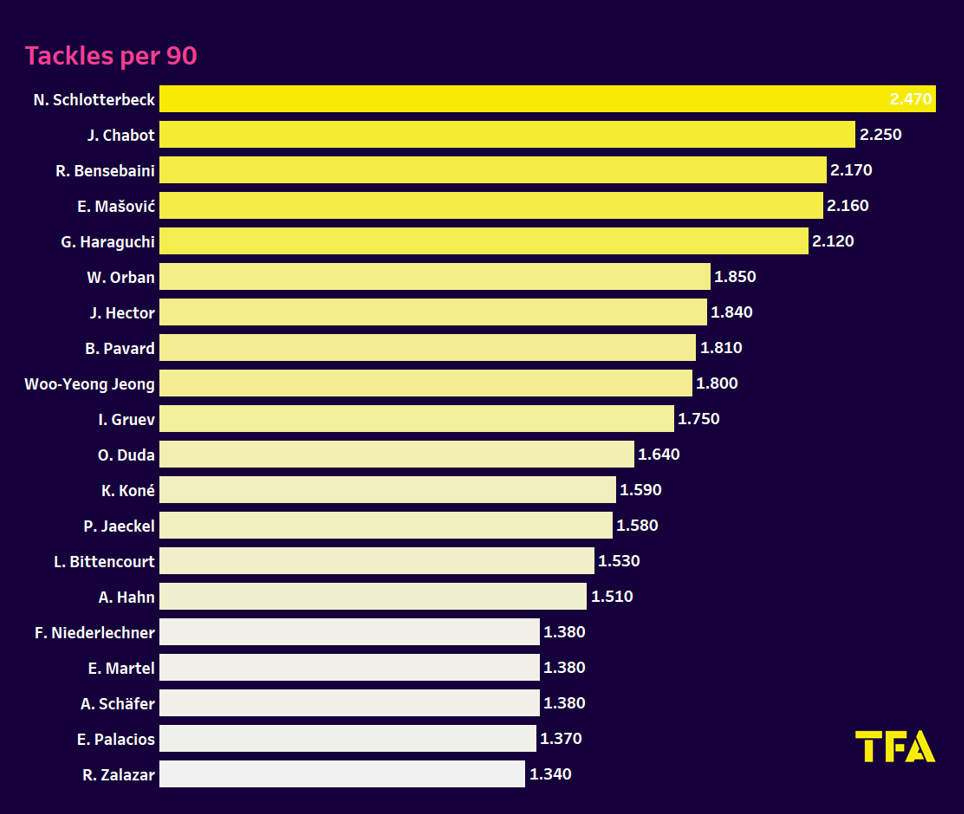 The young centre-back leads the chart for most tackles per 90 minutes in the German Bundesliga. He has made eight tackles with a 50% success rate. This shows that Schlotterbeck likes to go hard for the ball, but two poor challenges have also led to a booking for the centre-back.

Schlotterbeck has had a good start to his Borussia Dortmund career. He has established himself in the first team at a young age and has a bright future ahead. He is getting a lot of game-time, and that will boost his confidence in a big season for Dortmund. Schlotterbeck will also look to play consistently to help his side win silverware. Borussia Dortmund have a new defensive enforcer, and they will look to get the best out of him before other clubs start showing their interest in the centre-back.