Borussia Dortmund’s season has not gone according to the plan. After crashing out of the Champions League in group stages, they failed to progress in the Europa League, falling to Rangers 4-6 on aggregate in the Europa League knockout round playoffs. The Black & Yellow’s Europa League exit means that their hopes of any silverware this season have virtually ended, as the Bundesliga is the only competition left for them to compete in for the rest of the season, where they currently sit second, seven points behind Bayern Munich.

With the ongoing talks of multiple players set to leave the club in the summer, including Erling Haaland, Manuel Akanji, Mats Hummels, and Marco Reus, the Dortmund hierarchy would be looking to make decisions on long-term futures in the coming months. While some of the players might renew their contracts, others could depart. It is looking likely that Dortmund would like to bring in suitable replacements for their outgoing players in the summer. One of the players that Dortmund have been linked with recently is RB Salzburg’s young forward, Noah Okafor.

Over the past few years, Salzburg have produced impressive talents who have made their presence known in top European leagues. The likes of Erling Haaland, Patson Daka, and Dayot Upamecano once plied their trades at Salzburg. In the current crop of talented youngsters, Dortmund have already been linked with Karim Adeyemi. However, Noah Okafor is another name on Dortmund’s wish list. The Swiss international has scored seven goals and registered five assists in 15 appearances in the Austrian Bundesliga. In the Champions League as well, the 21-year-old made six appearances, starting in five.

Let’s take a look at some stats from the Champions League to gauge whether Salzburg’s speedy youngster would be a good fit at Dortmund. 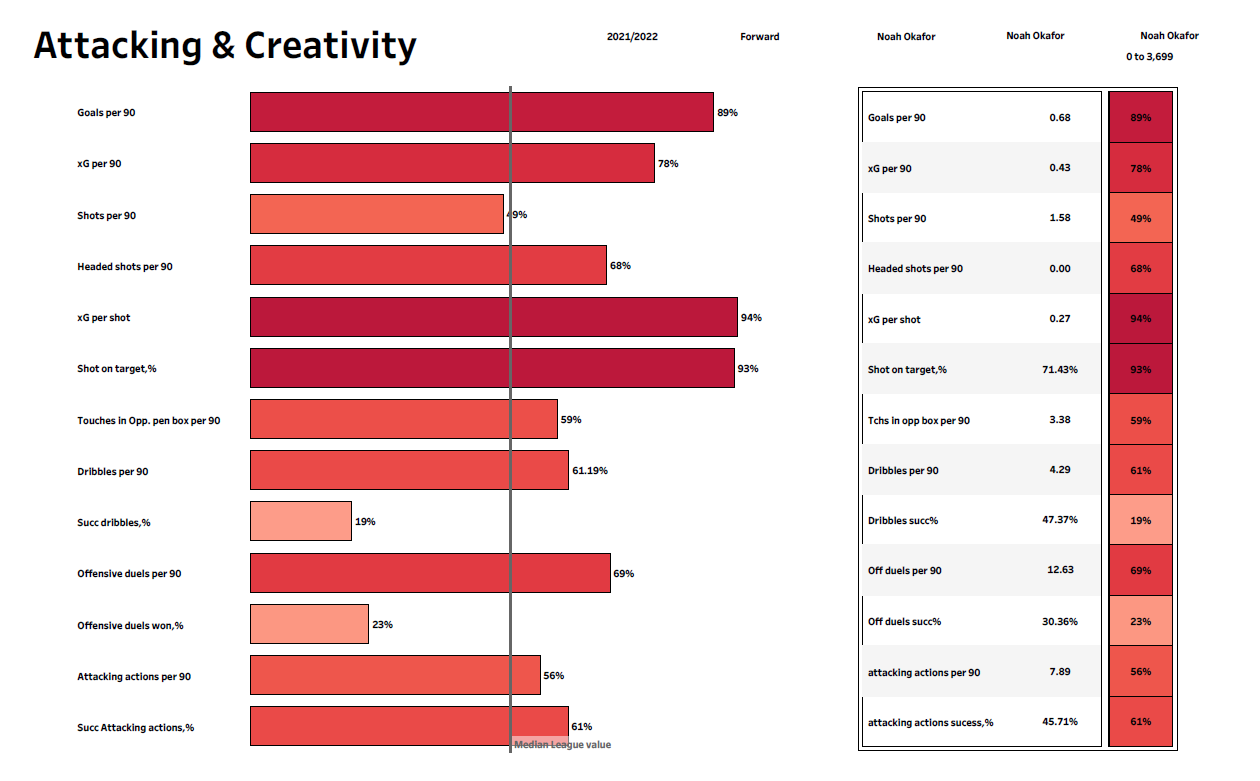 In the above viz, we can see Okafor’s attacking & creativity stats. He has ranked highly in terms of xG per shot, goals per 90, and shot accuracy. The youngster has averaged 0.68 goals per 90 with an xG of 0.27 per shot. His shot accuracy of 71.43% is also impressive. Over the last two seasons, Okafor has matured into an excellent attacker for Salzburg. His playing style is dynamic, and he utilizes his explosive pace to move into threatening areas in the opponent’s half. 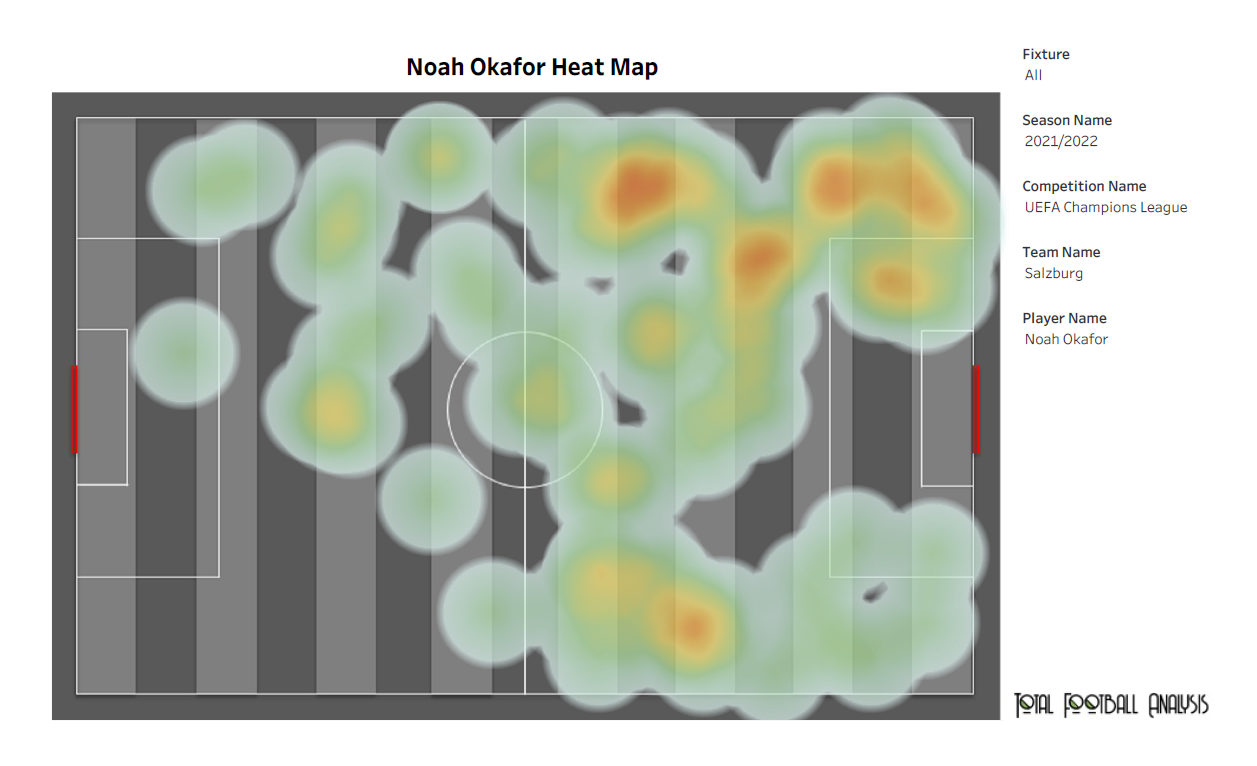 The above viz highlights the locations on the pitch where Okafor has been active. We can see that he has mostly occupied the wide-left position while also drifting into central areas in the opponent’s half. Okafor is impressive in Salzburg’s attacking setup because of the freedom afforded to him. He frequently drops deep or moves into wide areas to receive the ball. In addition, he makes explosive runs into the box during his team’s attack. Okafor is capable of operating as a centre-forward, winger, or attacking midfielder – an ability that outlines his versatility. 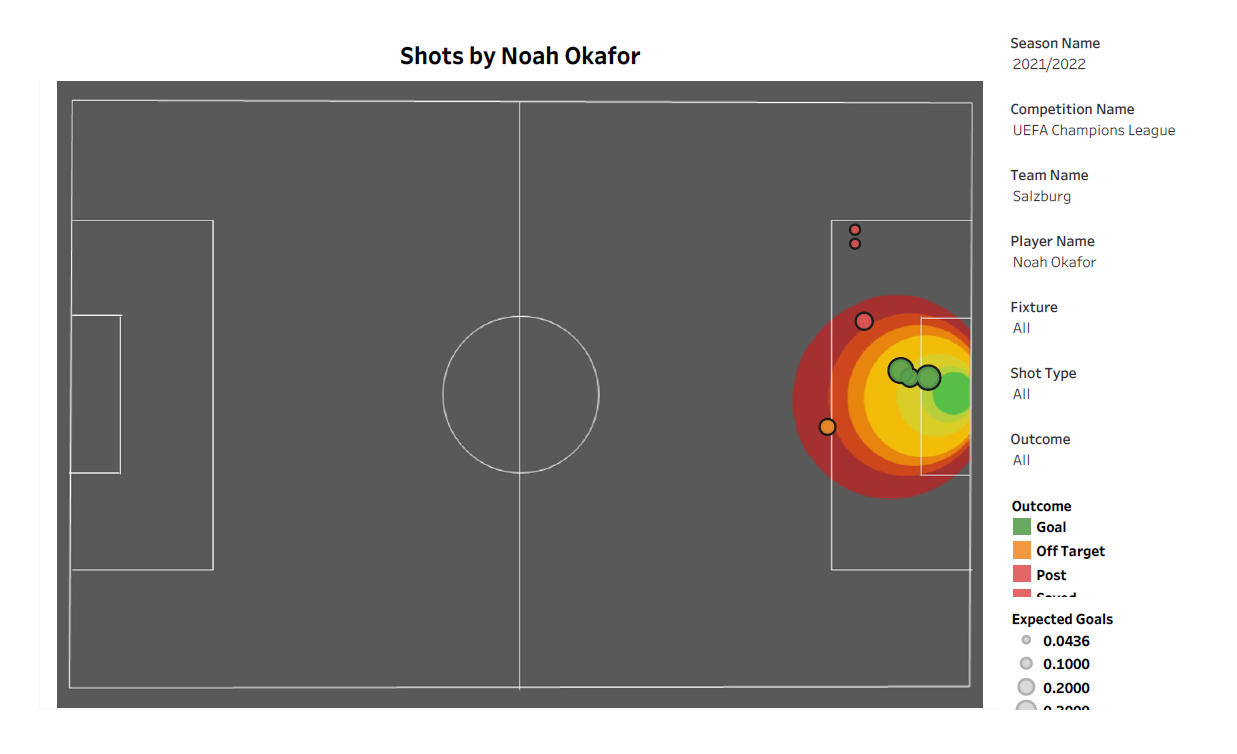 With the current Dortmund side lacking pace and players who can beat defenders in tight spaces, Okafor could provide Dortmund with the attacking edge in wide areas. The 21-year-old is already experienced at playing in the Champions League and could integrate into Dortmund’s squad with ease.