Borussia Dortmund acquired the services of 20-year-old German player Karim Adeyemi from RB Salzburg. The forward impressed everyone with his impressive displays in the league as well as in the UEFA Champions League. The German club confirmed his move soon after Erling Haaland to Manchester City was also confirmed. Adeyemi has a different attacking approach than the Norwegian, and he isn’t the likely replacement for them. However, his skills, pace and quality make him a future replacement for their captain and long-time club servant, Marco Reus. Adeyemi likes to play on the wide sides, which is similar to where Reus likes to play. Here are some of the stats that will show why he could be the successor of Marco Reus. 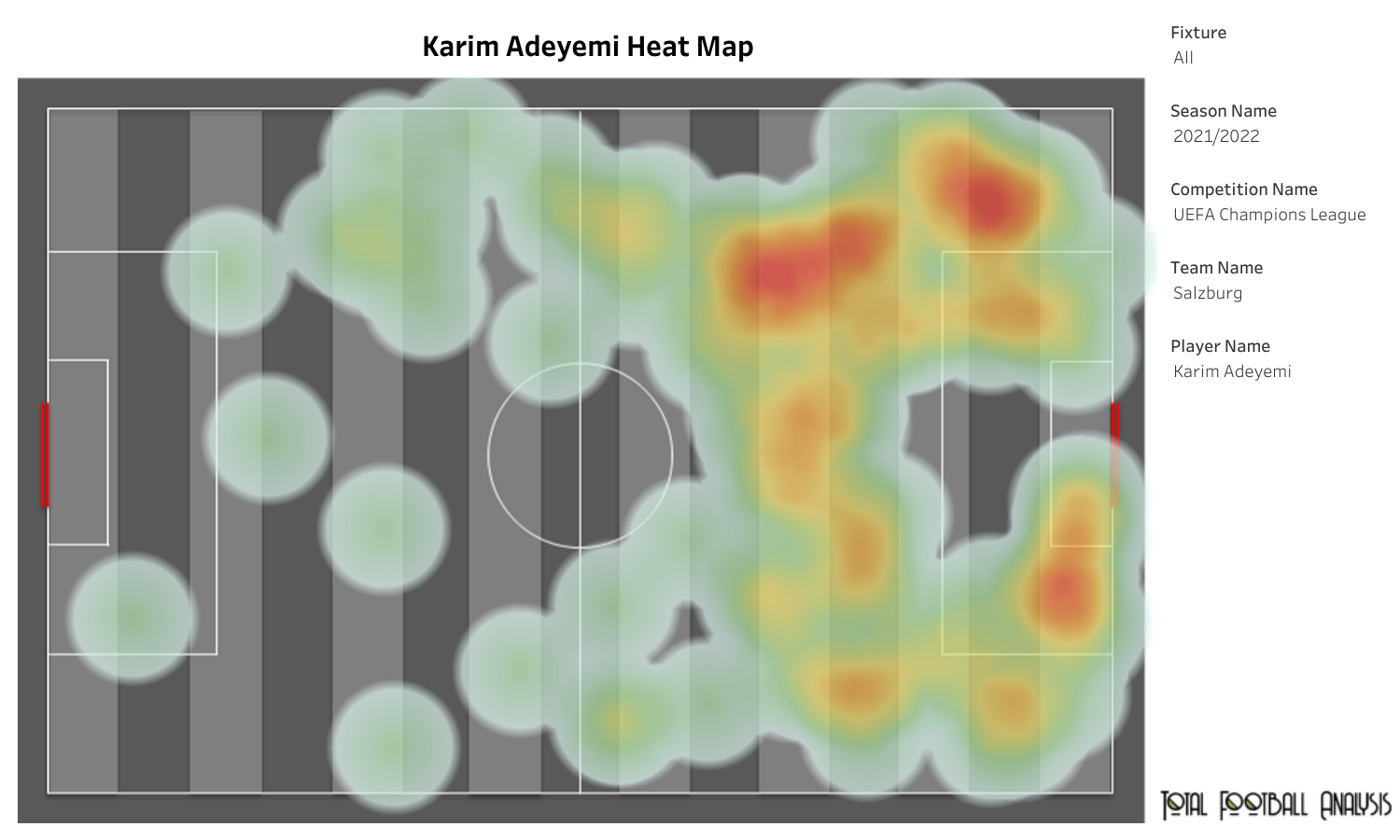 Adeyemi made ten appearances in the UEFA Champions League, with two coming in the qualifying stage. The player scored four goals and provided an assist. The above viz shows the heat map of the player in those ten matches. We can observe that he has played towards the left and right sides, with the left side being his starting position. He has stretched the opposition defence and has penetrated it by making full use of the sideline. The player has taken 37 touches inside the opposition’s penalty box. 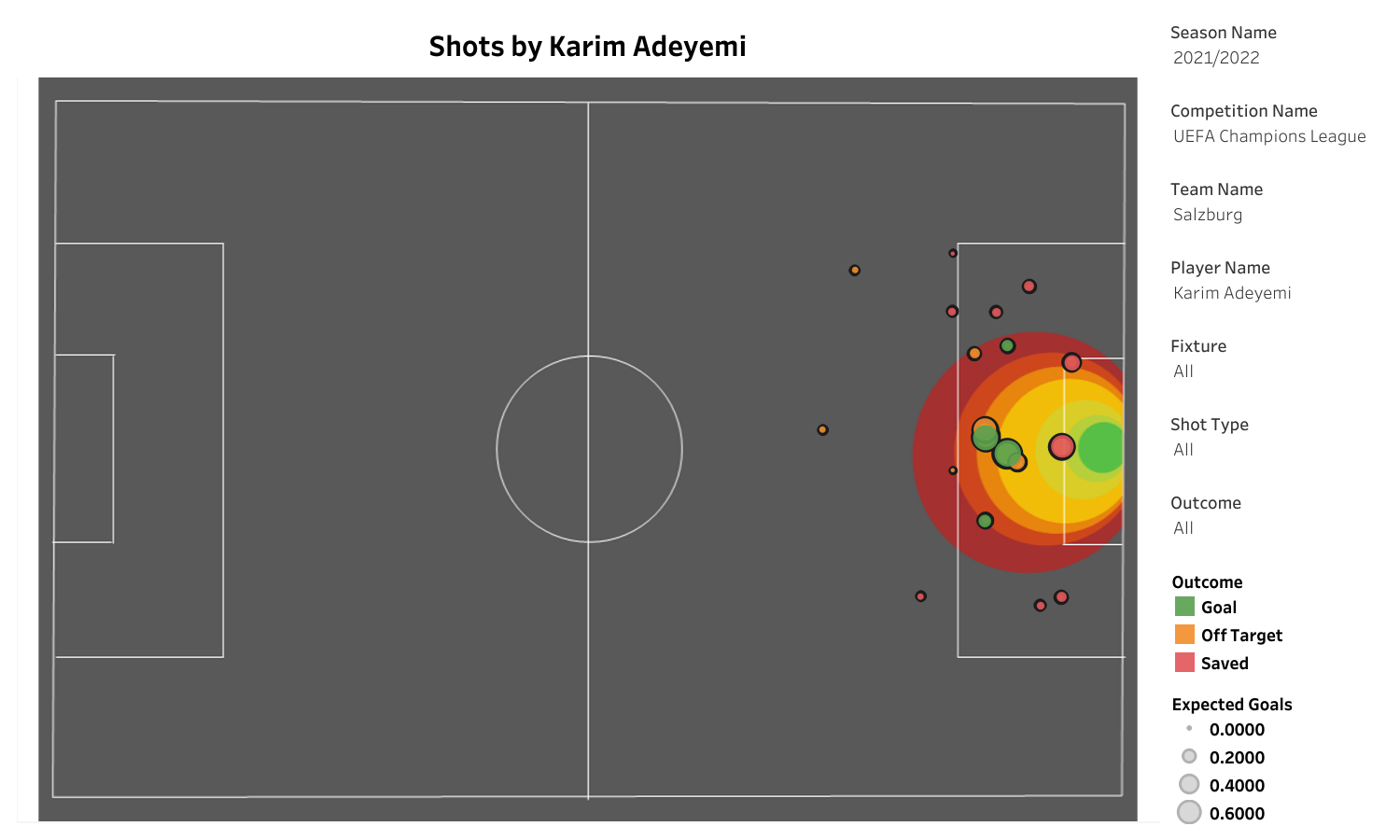 The 20-year-old scored four goals, two of which came off the penalty spot. He attempted 20 shots in the competition, most of them from the left side. His overall xG rate for the competition was 5.25. The forward has troubled the opposition defence with his speed and has similar traits to Reus. He likes to cut inside and attempt shots towards the opposition goal. He scored 19 goals in the Austrian Bundesliga and helped his side to another league title.

Adeyemi has also created some threats from passes. He attempted 112 passes and provided an assist. These 112 passes included 15 crosses, three smart passes, and through passes each. 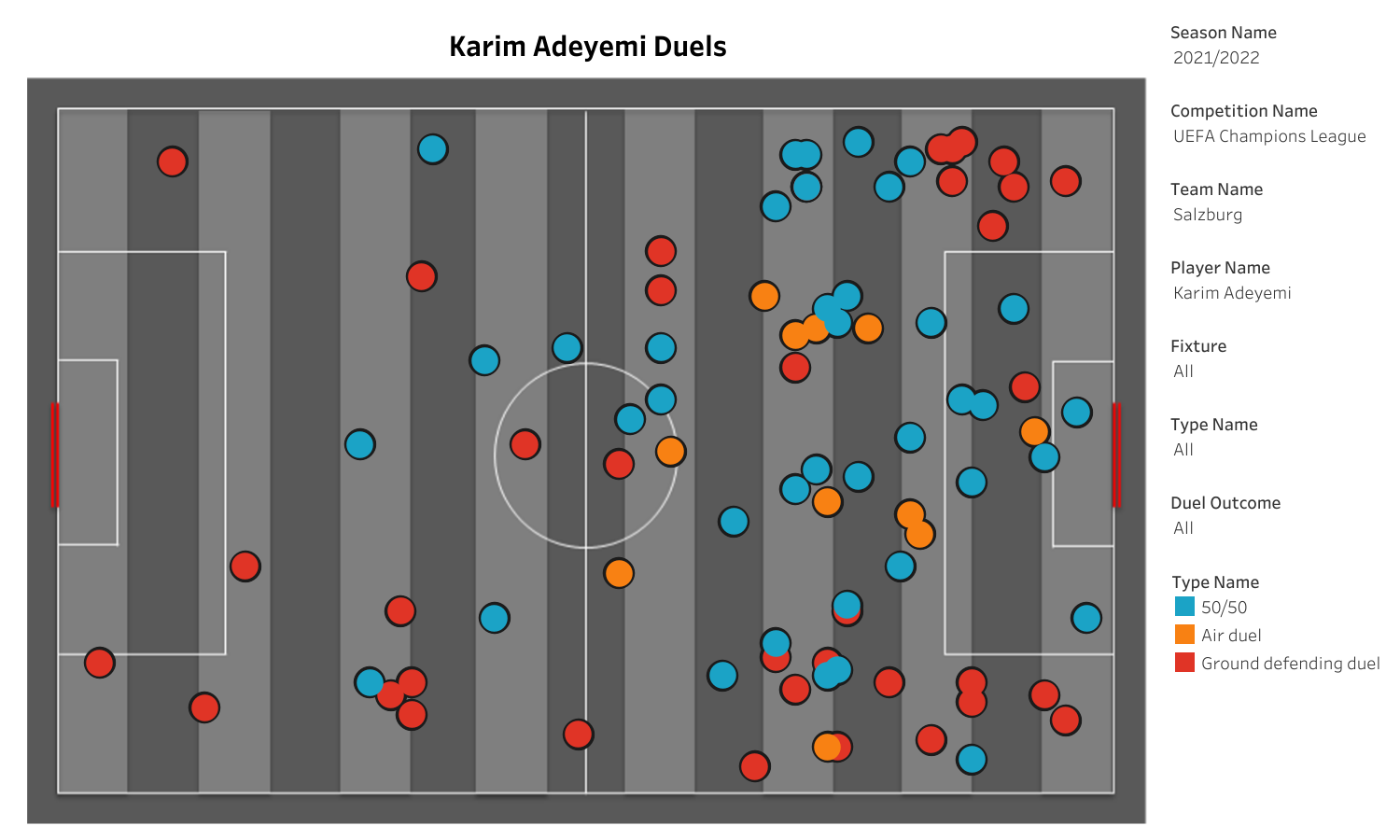 One area where the youngster impressed was by making defensive contributions. The above viz shows all the duels contested by Adeyemi. We can observe that most of the duels contested by him have been loose ball duels, followed by defensive duels and aerial duels. He pressurises the opposition defender by closing him down and contesting a duel. The other defensive contributions include nine interceptions and 22 recoveries. Of those, 17 were made inside the opposition’s half.

Karim Adeyemi could be one of the top signings of the summer. He has a bright future ahead of him, and the Dortmund team is full of young talents. They are known for nurturing talent for the future. He could be their long-time successor to Marco Reus and help the German club achieve greater heights.