Mahmoud Dahoud joined Borussia Dortmund in 2017 from Borussia Monchengladbach. The injuries shortened his time on the pitch, and the player failed to cement his place in the starting XI. However, he has found the rhythm and is slowly making his way into the team. Injuries once again affected him last season, but he was excellent in the limited time he spent on the pitch. With Axel Witsel leaving the club in the summer, Dahoud is now set to take charge of Dortmund’s midfield from the upcoming season. The 26-year-old German midfielder was impressive in the limited appearances he made in the UEFA Champions League last season and looks like he is ready to take charge.

The midfielder made four appearances in the UEFA Champions League last season and these included three starts. The player provided two crucial assists, but these were not enough to secure Borussia Dortmund a place in the knockout stage of the competition. 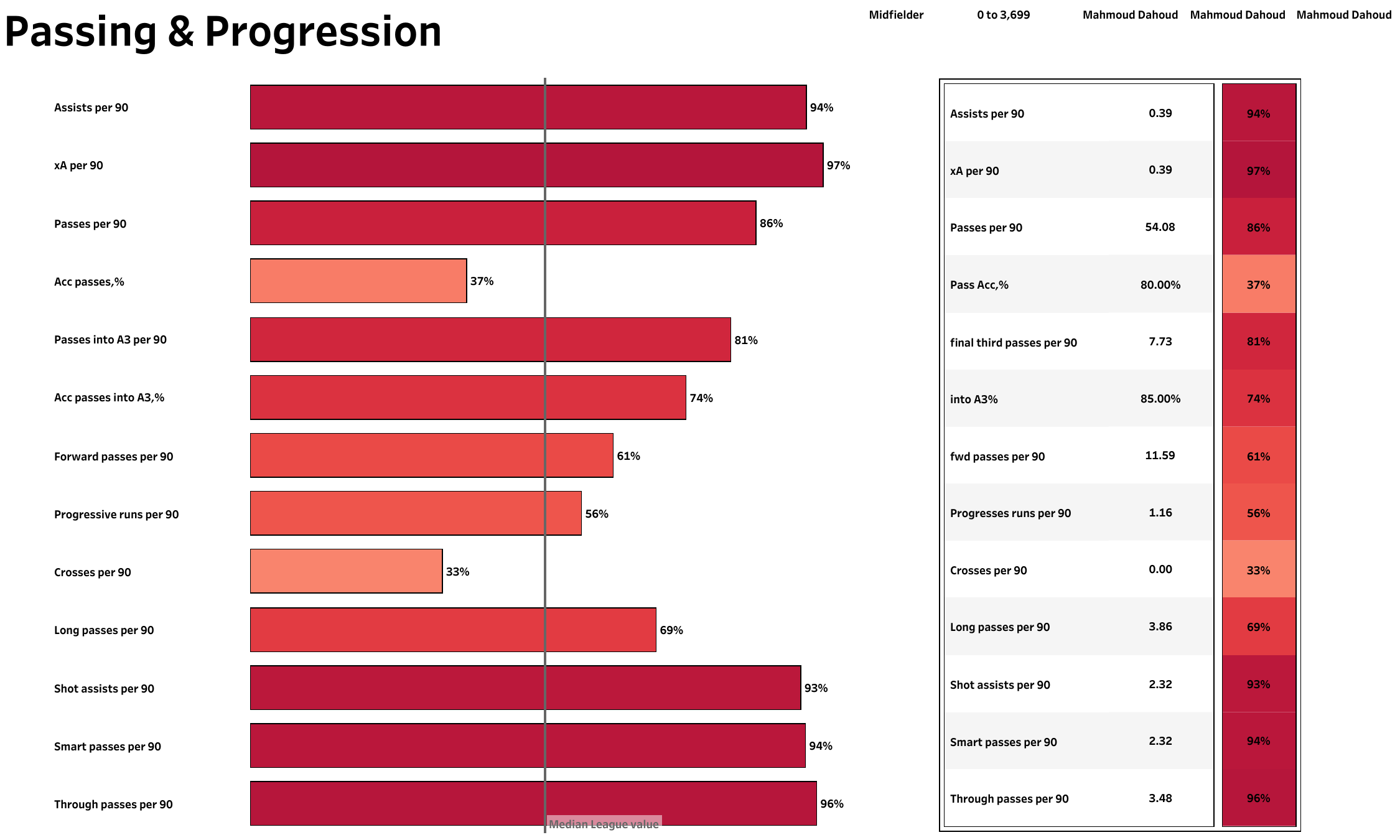 The above viz shows the passing stats of the midfielder in comparison to the other midfielders in the UEFA Champions League. When looking at the above chart, the general rule is that the longer the bar, the better the performance — you can see the league average in the middle, and the % is the percentile rank the player is in. The midfielder averaged 54.08 passes per 90 minutes with an accuracy rate of 80%. He sits in the midfield and likes to dictate the play from there. Notably, the player has a very high percentile rank for attempting smart passes and through passes. 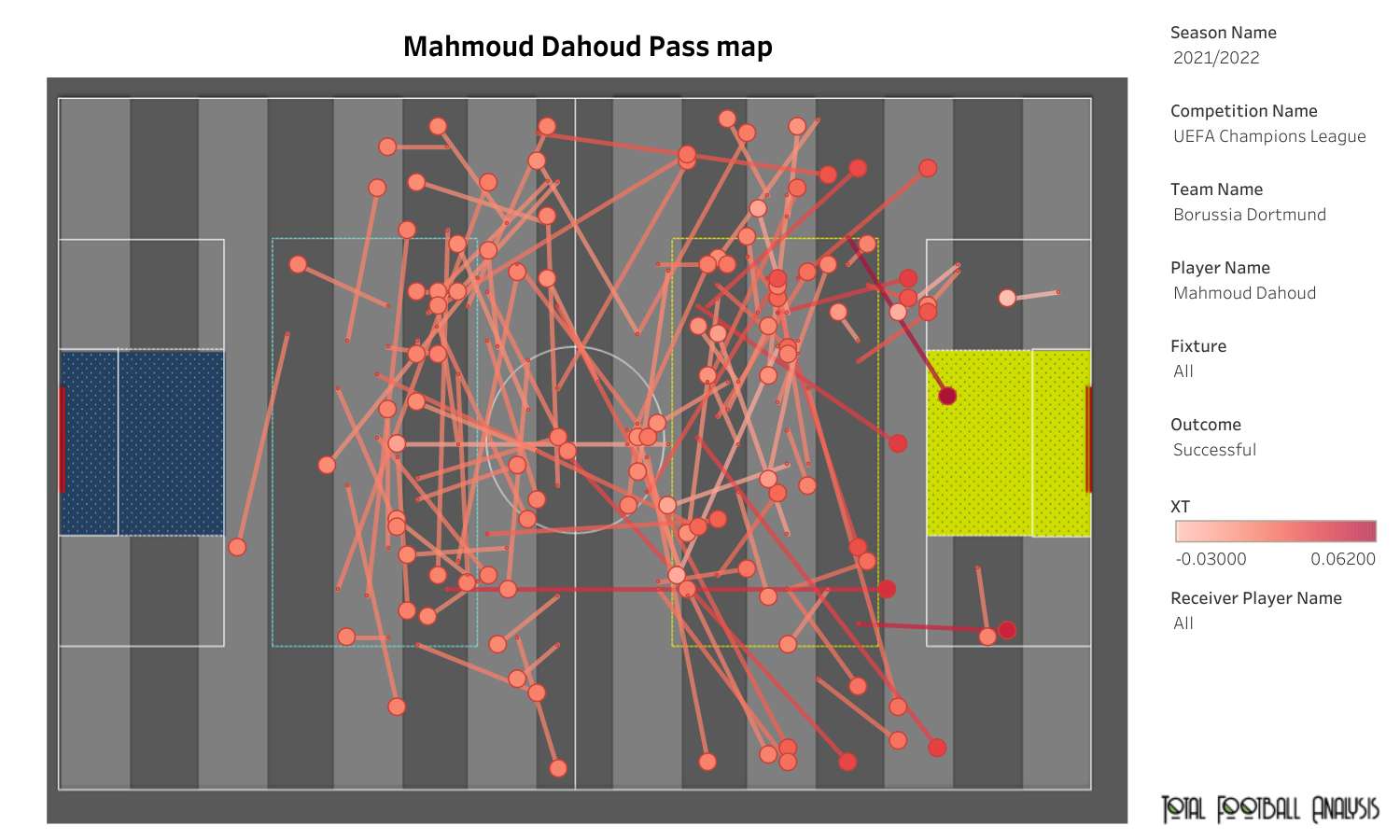 The above pass map shows that Dahoud likes to play the ball from deeper positions in the midfield. He didn’t make any wider runs or take wider positions. Dahoud has distributed the ball from the middle third to the final third or to the defensive third. He attempted most of the passes towards Jude Bellingham and Thomas Meunier.

Dahoud attempted six shots and managed to hit the target once. He scored two goals in the Bundesliga last season and has the potential to beat the opposition keeper. 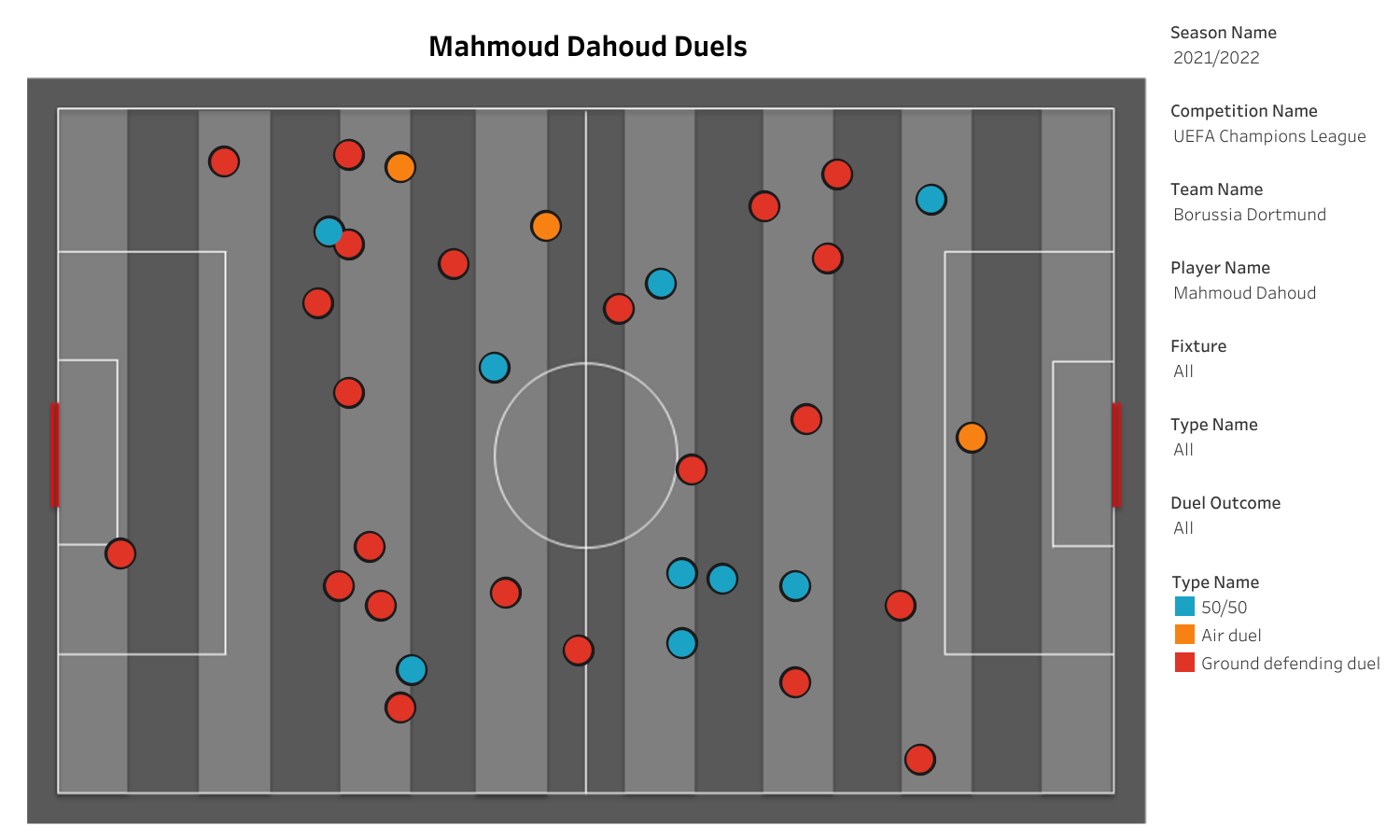 The midfielder was also involved in a few defensive actions, which could aid his team’s goal defence. Dahoud averaged 8.88 defensive duels, 1.16 aerial duels and 3.48 loose ball duels per 90 minutes. He failed to win most of the duels but wasn’t afraid of making challenges.

Mahmoud Dahoud is a good passer of the ball and can create chances from the middle. Borussia Dortmund will expect him to remain fit and play the full season next year.