Borussia Dortmund saw their rivals, Bayern Munich, clinch their tenth consecutive Bundesliga title. Since then, the management has focused attention on signing the players and rebuilding the team. Borussia Dortmund have released a lot of players and already signed their replacements. They have a new centre-back pairing and are focusing on improving the defence after leaking goals in the last season. One of the positions in the team for which the German club is looking for players is the left-back role. Dortmund have Raphael Guerreiro and Nico Schulz in the left-back positions. Both players have an excellent attacking instinct but failed to cement a regular spot in the team. The management is looking to offload one of the players and bring in a replacement. 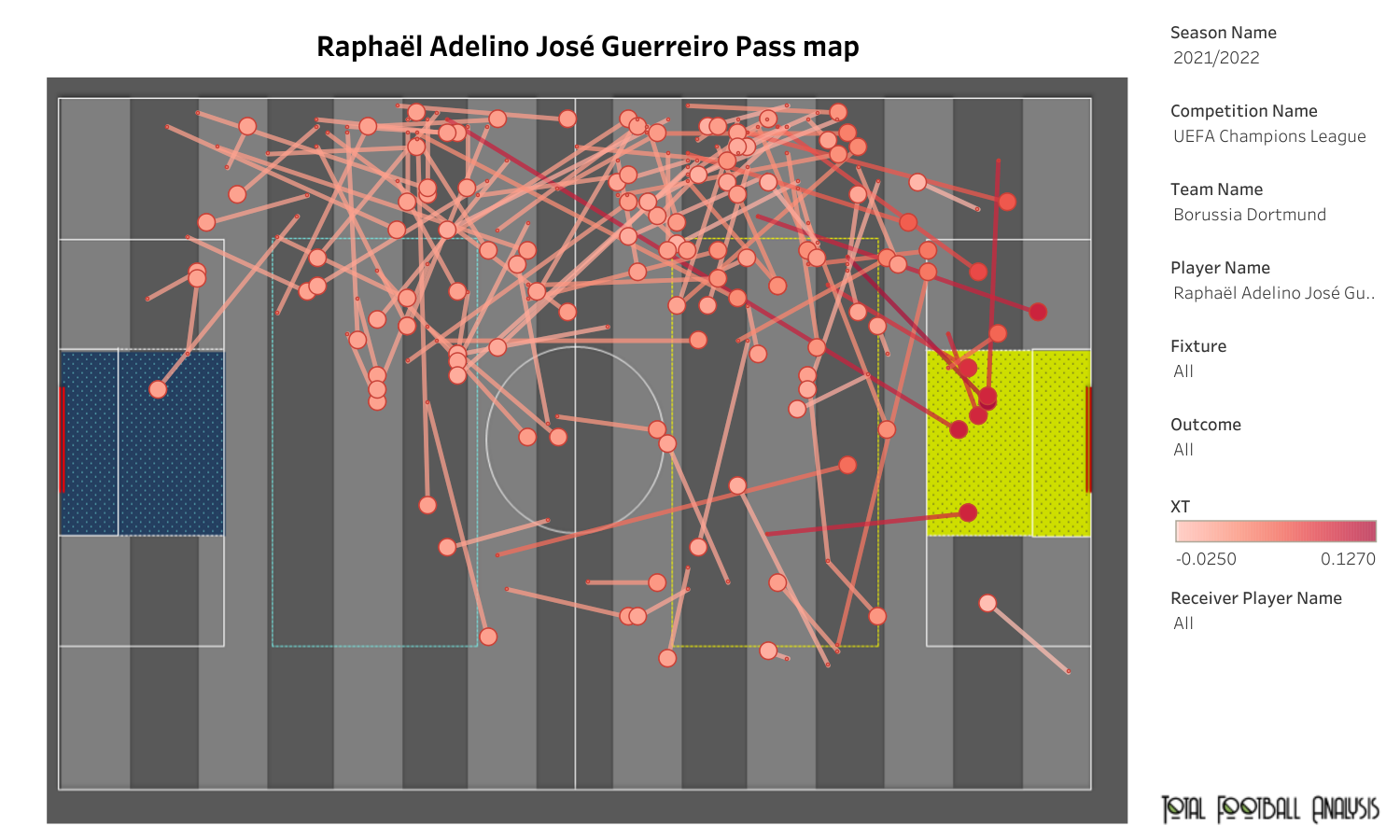 Guerreiro was the regular choice at left-back for Borrusia Dortmund last season. He made 29 appearances in all competitions and started in 25 games. He scored five goals and provided three assists. He is an attacking full-back who creates a lot of threats. The above viz shows all the passes that were attempted by the full-back last season in the UEFA Champions League. He made three appearances in the competition and started in two games for the German side. The Portuguese international averaged 57.99 passes per 90 minutes with an accuracy rate of 86.4%. Guerreiro showed a lot of variety in his passing as he averaged 2.3 smart passes and 2.8 through passes per 90 minutes. By looking at the above viz, we can observe that the full-back attempted passes from the edge of the middle third into the opposition’s penalty box. 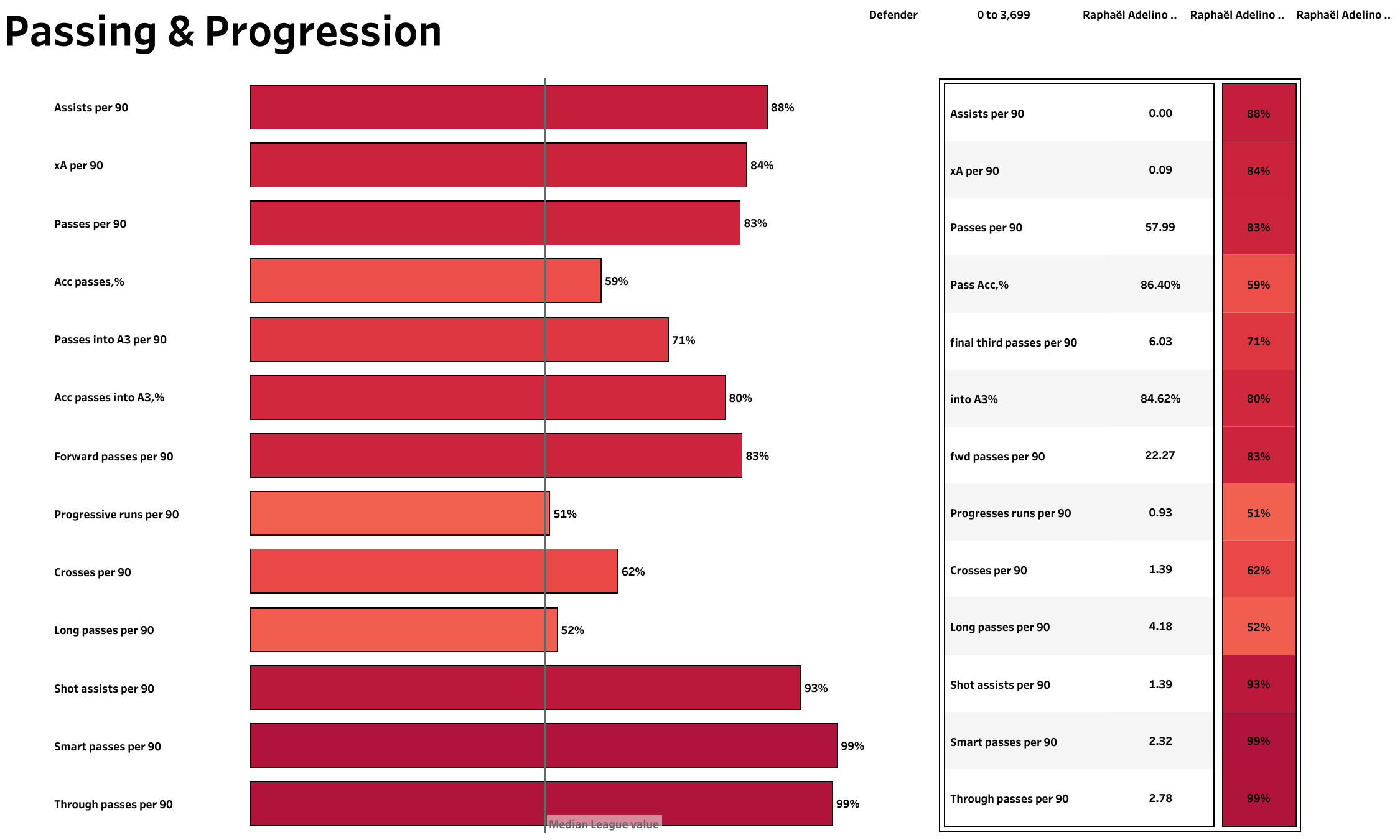 When looking at the above chart, the general rule is that the longer the bar, the better the performance — you can see the league average in the middle, and the % is the percentile rank the player is in. By looking at the above chart, we can notice that the player had a high percentile rank amongst other defenders for attempting smart passes, through passes and shot assists per 90 minutes. Other than this, the full-back was involved in 7.4 attacking actions per 90 minutes with a 43.75% success rate.

Guerreiro was only involved in 7.4 attacking actions but had a success rate of 81.25%. He stays high up on the pitch and likes to attack more. 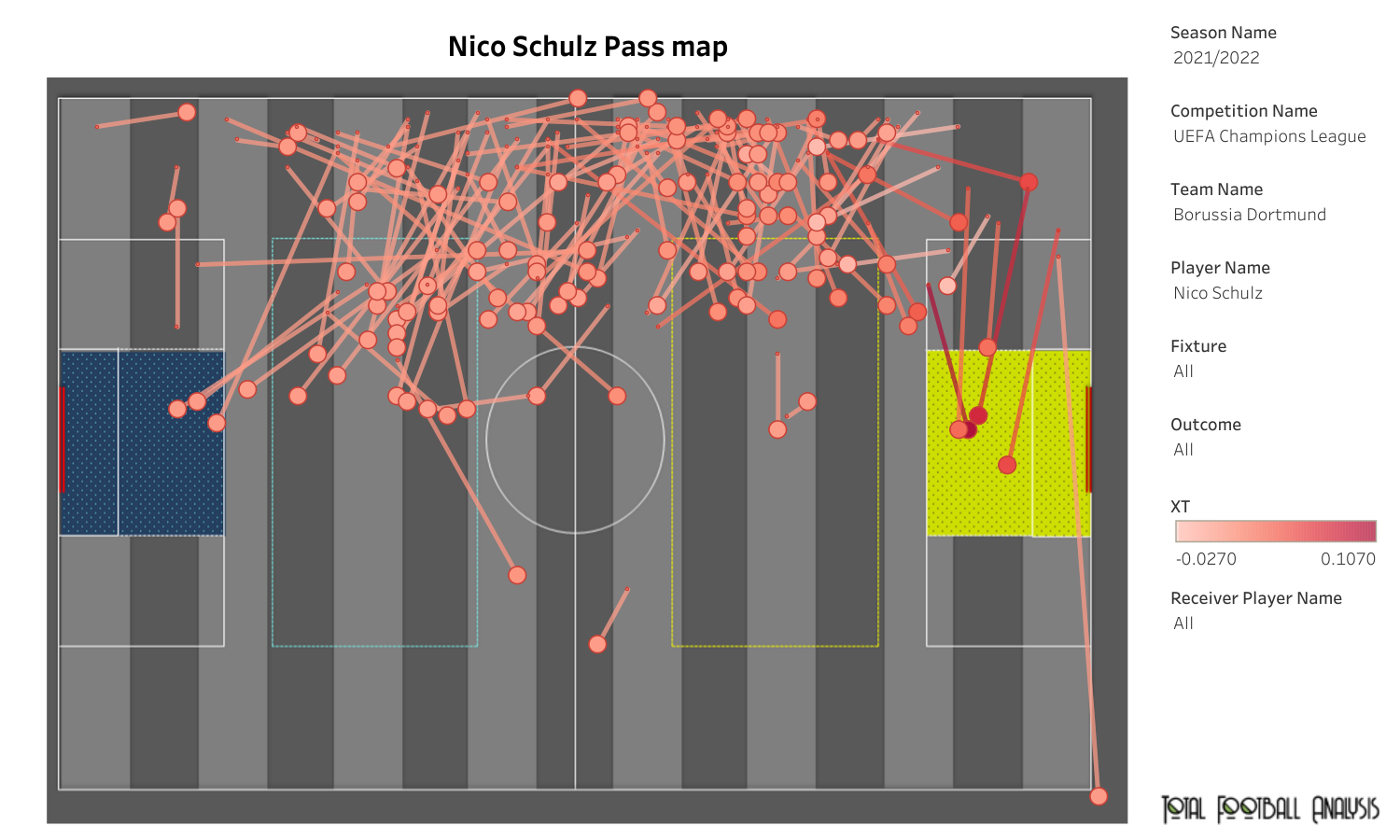 Schulz shared the left-back position with the Portuguese international. He made 24 appearances for the German club in all competitions and provided three assists. The above viz shows all the passes attempted by Schulz in the UEFA Champions League in the four matches he featured in. The 29-year-old averaged 57.6 passes per 90 minutes with an accuracy rate of 85.38%. Schulz provided one assist in the UEFA Champions League. He was involved in 4.43 attacking actions per 90 minutes and had a 50% success rate.

The above stats show that both players are good at attacking but have been vulnerable in defence. Borussia Dortmund leaked a lot of goals last season, and they would like to improve their defence for the upcoming season. The German club is likely to sell one of these players, and Nico Schulz is the player who is likely to leave the club. However, they haven’t signed a left-back and might consider sticking with these two.