In the past few days, it has been reported that Manchester United are considering a move for Borussia Dortmund midfielder Jude Bellingham. United midfielders including Paul Pogba, Jesse Lingard, and Juan Mata, are all out of contract after the end of the season, which means that the Red Devils would require reinforcements in the midfield area. Bellingham is one of the reported targets among others, such as Declan Rice of West Ham and Amadou Haidara of RB Leipzig. While a deal for Bellingham in January is highly unlikely, United are reportedly planning a move for the midfielder in the summer.

According to the reports that have surfaced recently, United’s interim manager, Ralf Ragnick, has highlighted three players that his side would need to replace. The players that were reportedly highlighted are Harry Maguire, Luke Shaw, and Aaron Wan-Bissaka. Multiple reports have also pointed out that the Red Devils could add Wan-Bissaka among other players in a part-exchange deal for the 18-year-old Bellingham, which would see the full-back move to Dortmund.

Since Ragnick was appointed the interim manager, Wan-Bissaka has struggled to make the starting XI. The full-back, who was a regular starter under the previous manager, Ole Gunnar Solskjaer, has been struggling to adapt to Ragnick’s system and as a result, has seen his game time reduce. Wan-Bissaka, who has been a prominent feature in the right-back position since his move to Old Trafford, has seen his form decline this season. So far, the right-back has made 15 appearances in the Premier League.

Dortmund were reportedly interested in signing Wan-Bissaka in the past when he was at Crystal Palace. Their defensive inefficiencies have already seen them crash out of the Champions League, and they have been conceding many goals in the Bundesliga as well. Although current first-choice right-back, Thomas Meunier, is performing well this season, Dortmund could look to bolster the area in the near future, given the fact that Meunier has turned 30 and could not be expected to continue at the highest level for long, given the physical demands of a modern full-back.

Let’s take a look at some stats to gauge whether Dortmund should accept Wan-Bissaka if a part-exchange deal is proposed. 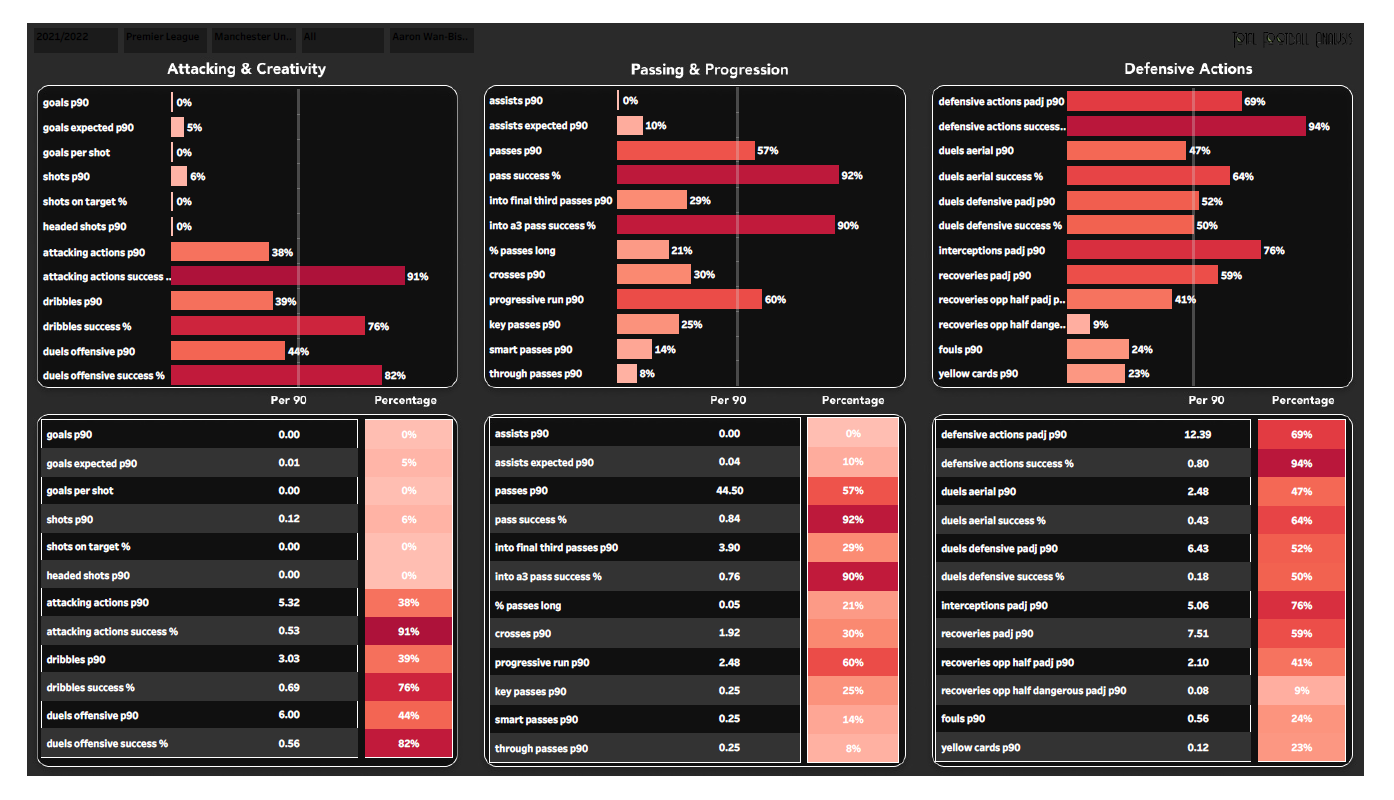 In the above viz., we can see Wan-Bissaka’s attacking & creativity, passing & progression, and defensive stats. This season Wan-Bissaka has been criticized for his decline in recoveries and snuffing out the opposition attacks. His decline in recoveries can also be seen in the above viz. While overall he has fared well in defensive areas, his attacking output has declined. In the previous seasons, Wan-Bissaka was instrumental in United’s attack on the break and was able to recognize the opportunities to break forward if a teammate won the ball. 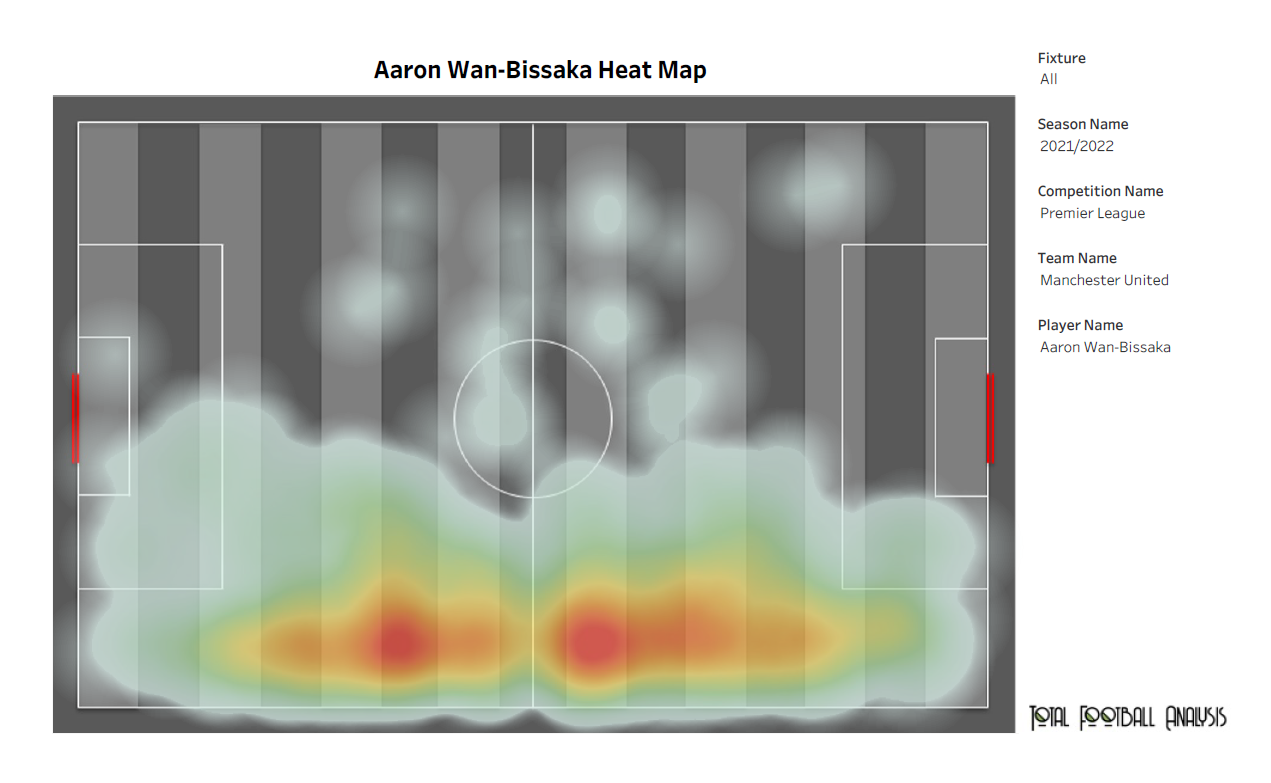 Wan-Bissaka’s heat map displays the areas of the pitch where he is most active. The red zones indicate his work rate on the right flanks. We can see that despite his low attacking output, Wan-Bissaka has continued to make forward runs to support his team during the attacks. While his crossing leaves a lot to be desired, nevertheless, he can utilize his pace and dribbling ability to create space for himself and get into threatening areas near the opposition box. 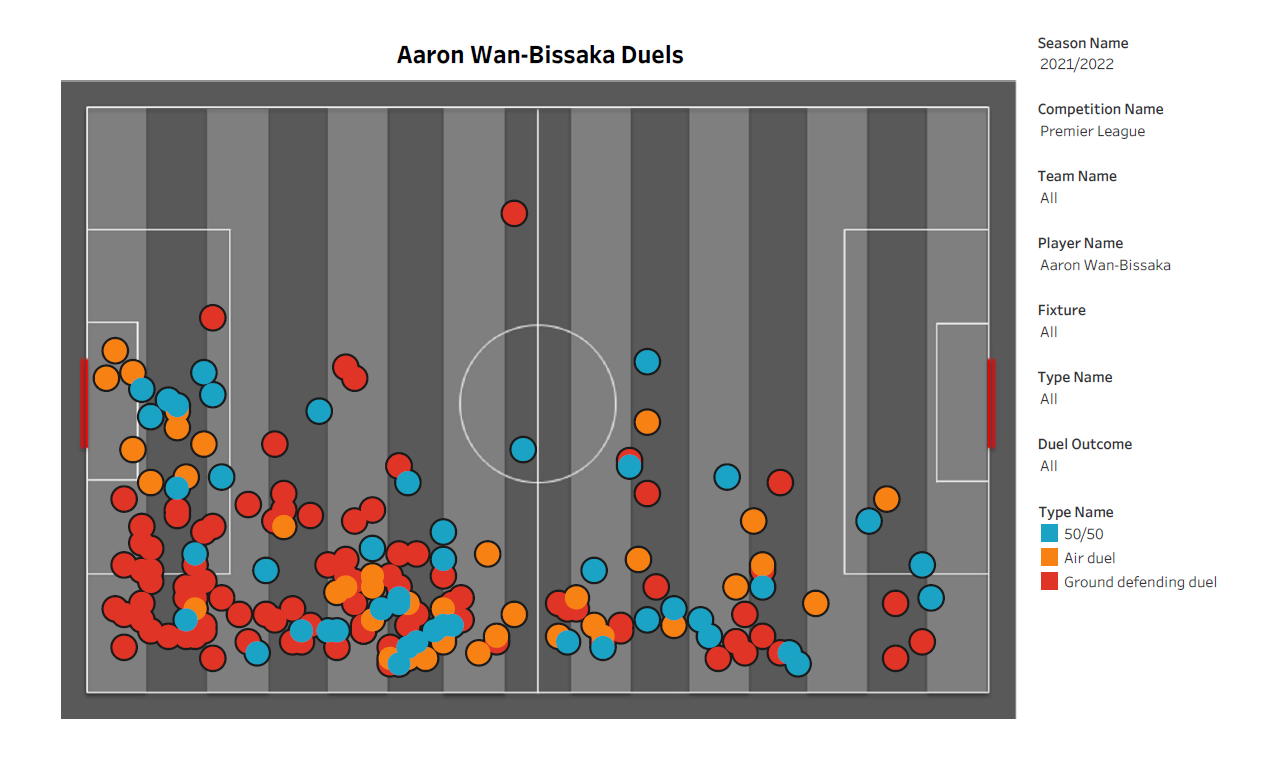 In the above duel map, we can see the areas where Wan-Bissaka has engaged in defensive and aerial duels. The full-backs’ greatest asset is his defensive ability in one-on-one situations. His quick turn of feet and agility allow him to react to the movement of the opponent winger. Wan-Bissaka is also impressive in marking his man and rarely fails to track his man near the touchline. Although he is brilliant in defensive duels, Wan-Bissaka can improve a lot in his aerial duels as he often mistimes his jumps. 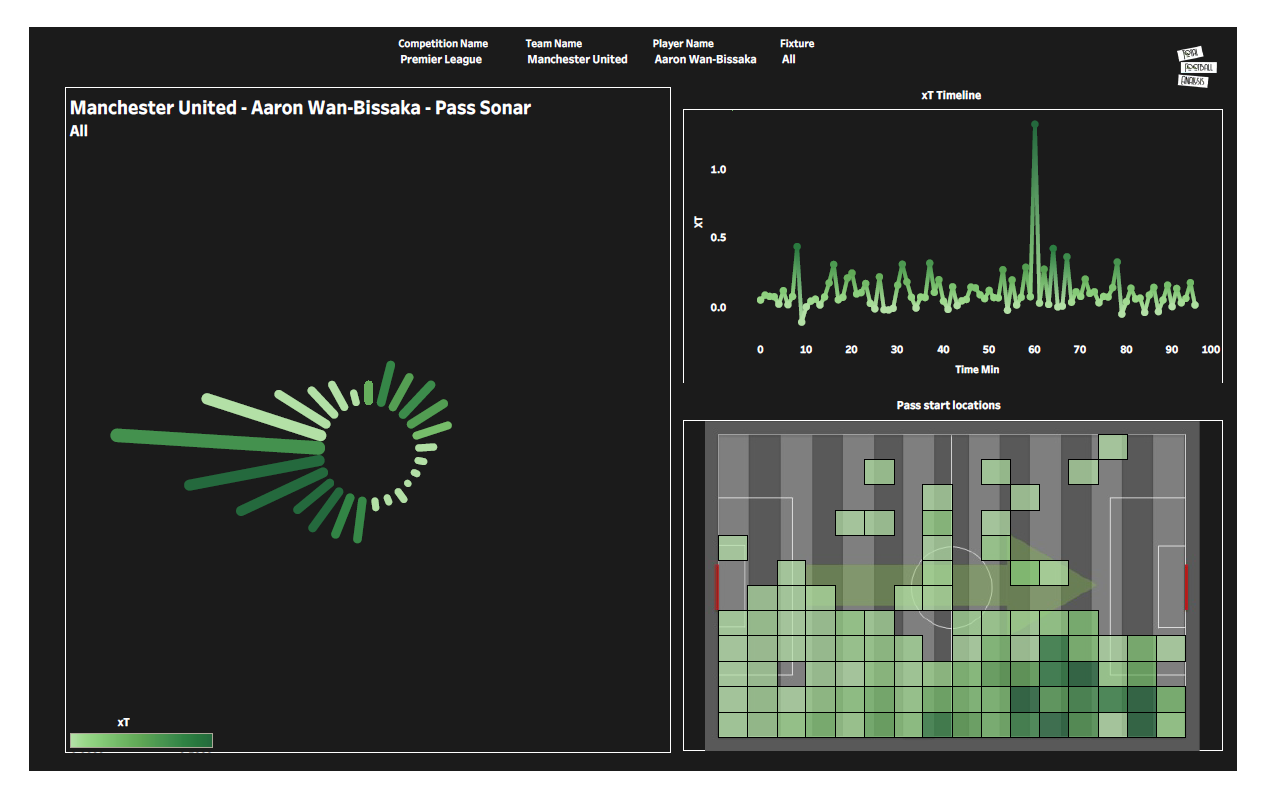 Pass Sonar outlines the direction of pass that a player or a team tends to make and indicates a player’s influence on the movement of the ball. In addition, it shows the frequency distribution of different passing angles for an individual player, as well as the typical length of pass attempts. Wan-Bissaka’s pass sonar and pass start locations provide a sense of the directionality of his passes and the threat associated with those passes.

While his recoveries have declined this season, Wan-Bissaka does possess the pace and work rate to regain his form in that area. Defensively he remains strong, but his attacking output and deliveries need a lot of work. Although he might not suit Ragnick’s desired system, Wan-Bissaka could provide depth to Dortmund in the right-back area.